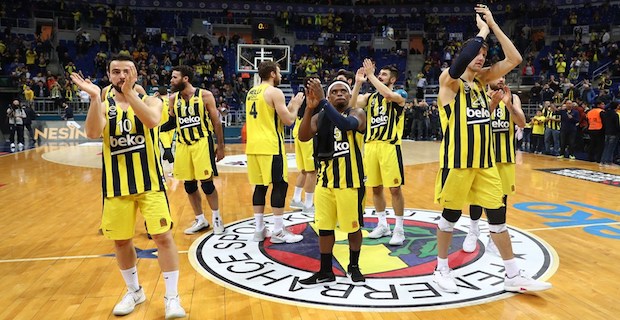 Fenerbahce Beko's Serbian forward Nikola Kalinic, who was selected as the player of the game, scored 22 points for his team.

The Italian club's U.S. forward, James Nunnally, racked up 26 points against Fenerbahce Beko and was the top scorer of the game.

Dictating the game held at the Mediolanum Forum near Milan, visitors Fenerbahce Beko took a large halftime lead of 52-42.

The away victory in the Round 29 game saw Fenerbahce Beko clinch the lead in the EuroLeague regular season as the Istanbul heavyweights earned their 24th win this season.

They lost only five games.

Regular season leaders Fenerbahce Beko have already qualified for the next phase, the EuroLeague playoffs.

Meanwhile, Thursday's losers, AX Armani Exchange, have risked their playoff chances as they are now in eighth spot in the standings.

The winners will advance to the Final Four on May 17-19 at Fernando Buesa Arena in the Spanish city of Vitoria-Gasteiz in single-elimination matchups.

Keywords:
Fenerbahce BekoEuroLeague
Your comment has been forwarded to the administrator for approval.×
Warning! Will constitute a criminal offense, illegal, threatening, offensive, insulting and swearing, derogatory, defamatory, vulgar, pornographic, indecent, personality rights, damaging or similar nature in the nature of all kinds of financial content, legal, criminal and administrative responsibility for the content of the sender member / members are belong.
Related News