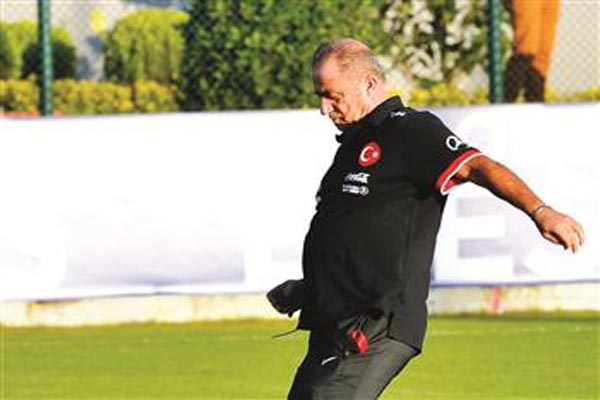 Driven Galatasaray coach was given the job to take over the vacant national team job after the departure of Abdullah Avcı last month. However, Terim, who celebrated his 60th birthday on Sept. 4, decided to take over the post only on a temporary four-game run, refusing to leave his club job.

Terim took over a team that makes a desperate bid to qualify for next summer’s showcase tournament in Brazil. Turkey is left far behind runaway leader the Netherlands, and will try to force a perfect four-game run in order to take over Hungary and Romania, who hold second and third spots respectively. After tonight’s game against Andorra, Turkey will visit Romania on Sept. 10.

Some of Europe’s leading nations can clinch qualification for the 2014 World Cup finals in a double-header of fixtures over the next week, starting on Friday.

Four-time world champions Italy, the Netherlands and Germany will all be in a position to book their flights to Brazil, while the situation in all of the continent’s nine qualifying groups will become clearer before the final fixtures in October.

Cesare Prandelli’s Italy have taken 14 points from a possible 16 in qualifying Group B without ever producing their very best form.

The Azzurri are four points clear of Bulgaria and five ahead of Czech Republic at the top of the group, so wins against both teams in Palermo and Turin in the next week will be enough to confirm qualification.

However, Italy’s task against the Bulgarians has been complicated by the absence of several players due to injury or suspension, including Mario Balotelli, while there have also been reports this week that Prandelli will step down after the World Cup finals.

The Netherlands have cruised through Group D so far, winning all six qualifiers, and that run appears unlikely to end when they go to Estonia on Friday and then Andorra next week, even with Rafael Van der Vaart out injured.

Wins in those games will see them qualify irrespective of what nearest challengers Romania and Hungary, who meet in Bucharest on Friday, can achieve.

Germany need other results to go their way if they are to stand a chance of sealing first place in Group C this month, with Joachim Löw’s side currently five points clear of Austria, Sweden and Republic of Ireland.

Germany face Austria in Munich’s Allianz Arena on Friday, and wins there and in the Faroe Islands on Tuesday will be enough if Ireland and Sweden slip up.

Germany have only ever lost two games in World Cup qualifying, but Loew has been unhappy with his side’s defensive performances in recent times, including in last month’s 3-3 friendly draw with Paraguay, and is also dealing with a lengthy injury list featuring the likes of Bastian Schweinsteiger, Mario Götze, İlkay Gündoğan and Lukas Podolski.

Mesut Özil will be there, however, after a transfer from Real Madrid to Arsenal that Löw described as “incomprehensible” but good for Germany.

“For me, it’s incomprehensible that Real would sell one of their top scorers,” Löw said.

“The transfer is good for the national team, he will have a top coach at Arsenal and will be playing at a very high level, that’ll suit him well.”

Spain are top of Group I but, with a lead of just one point over France, they still need to win their remaining three fixtures to be certain of a return to Brazil next year.

And they will not be taking Finland lightly after being held to a 1-1 draw when the teams met in Gijon in March.

Coach Vicente Del Bosque is also facing a dilemma in the goalkeeping department, with captain Iker Casillas’s place in doubt as he remains on the sidelines at Real Madrid.

“We have replacements who can bring a lot to the team,” said Del Bosque. “We can’t make excuses because of who is or is not playing.”

France’s chase of Spain continues with a tough-looking tie in Georgia, where Spain toiled for a 1-0 win last year.

In other matches, Belgium, Switzerland, Portugal and Bosnia-Herzegovina defend leads in their respective groups, while Group H leaders Montenegro face a huge test in Poland.

England are two points behind the Balkan nation but have a game in hand and should have few problems against Moldova at Wembley, with manager Roy Hodgson confident that his players’ minds will not already be on next week’s trip to Ukraine.

“I don’t think I will need to caution the players or get them to guard against complacency because as yet, I haven’t seen any signs of that in the games we’ve played,” said Hodgson, who will be without the injured Wayne Rooney.