Turkey show great character after going down 0-1 in 76th minute, Kaan Ayhan header give vital draw to Turkey in France 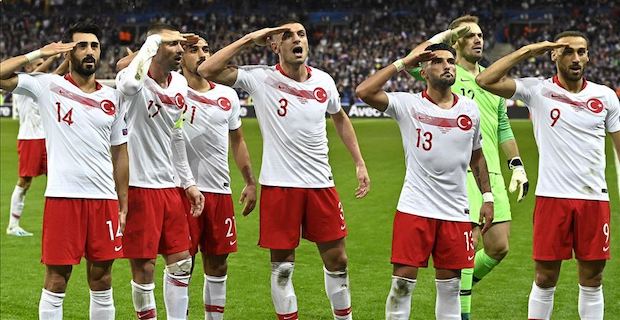 Turkey's national football team drew France 1-1 in an away match on Monday to remain at top of Group H in the UEFA EURO 2020 qualifiers. At Monday's showdown at Stade de France in Saint-Denis, the latest World Cup champions France dominated the goalless first half at home. The home team scored the opening goal in the 76th minute, with a header by Olivier Giroud from a corner kick.  However, Turkey gave a quick response with its own header goal by Kaan Ayhan in the 82nd minute.

Turkish players celebrated by making a soldier's salute to dedicate their goal to the Turkish soldiers who are currently in Syria's north for Operation Peace Spring.

The celebration was not televised by French TV direction.

Top two teams in each group will qualify directly for UEFA EURO 2020.

Both Turkey and France have big chances to reach EURO final.

On Friday, Turkey beat Albania 1-0 in the UEFA EURO 2020 qualifiers to top the Group H.

Iceland were on the third spot as they had 15 points.

Keywords:
EURO 2020 QualsTurkey Draw France
Your comment has been forwarded to the administrator for approval.×
Warning! Will constitute a criminal offense, illegal, threatening, offensive, insulting and swearing, derogatory, defamatory, vulgar, pornographic, indecent, personality rights, damaging or similar nature in the nature of all kinds of financial content, legal, criminal and administrative responsibility for the content of the sender member / members are belong.
Related News