Dina Asher-Smith became the first British woman to win a major global sprint title as she stormed to victory in 200m at the World Championships. 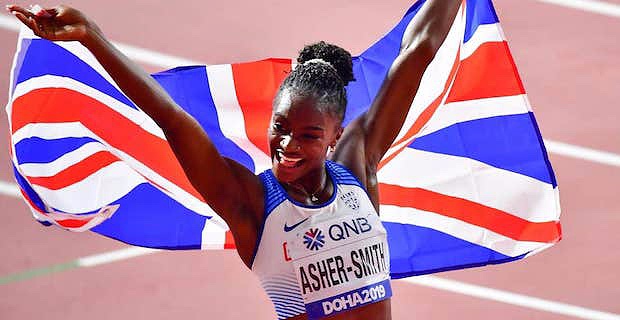 The 23-year-old, who won silver in the 100m, was the outstanding favourite and outclassed the field to take gold in a British record of 21.88 seconds. "I'm lost for words. I dreamed of this and now it's real," she told BBC Sport. "I don't think it's properly sunk in." Brittany Brown took silver (22.22) and Swiss Mujinga Kambundji bronze (22.51).

Asher-Smith is also the first Briton to win a world or Olympic sprint title since Linford Christie at Stuttgart 1993.

"I woke up today thinking, 'This is it. This is the moment you did all your work for'. The tiredness disappeared," she added.

There was no light show as seen in some other showpiece finals here in Doha, but instead a loud cheer greeted Asher-Smith as she smiled on her way to her starting blocks.

The race itself was a formality. Asher-Smith came off the bend with her nose in front before powering away from the rest of the pack in the final 60m.

Like on the celebration lap following the women's 100m final there were rows of empty seats in the Khalifa Stadium but Asher-Smith, who paraded the flag after winning silver on Sunday, enjoyed her victory with a large British contingent. There were also tears as she embraced her mother Julie.

Many had already placed the gold medal around the European champion's neck after the pre-event withdrawal of 100m champion Shelly-Ann Fraser-Pryce followed by that of fellow Jamaican and Olympic champion Elaine Thompson. And before the championships Bahamas' Shaunae Miller-Uibo, unbeaten in the 200m this season, opted only to run in the 400m because of the tight scheduling.

But bar the Bahamian, Asher-Smith had got the better of her other rivals during the Diamond League season. The lack of competition simply made the task easier for the Kent athlete.

Another world medal to come? And what about the Olympics?

It has been a tremendous six-year period for the Briton between winning the European youth 200m title in 2013 to becoming the senior world champion in Doha.

By her side since the age of eight has been coach John Blackie, who had spotted her potential at the Blackheath and Bromley Athletics Club.

Their partnership has produced junior titles at European and world level before she stole the show at the 2018 European championships by winning three titles.

Asher-Smith remains Britain's sole medallist in Doha with two, although that again might become three with the 4x100m relay team looking to add to the Euro title won in Berlin last year.

Her success here, however, is a stepping stone to her ultimate aim, which is Olympic success at Tokyo 2020.

Keywords:
Dina Asher-SmithWorld Athletics Championships
Your comment has been forwarded to the administrator for approval.×
Warning! Will constitute a criminal offense, illegal, threatening, offensive, insulting and swearing, derogatory, defamatory, vulgar, pornographic, indecent, personality rights, damaging or similar nature in the nature of all kinds of financial content, legal, criminal and administrative responsibility for the content of the sender member / members are belong.
Related News