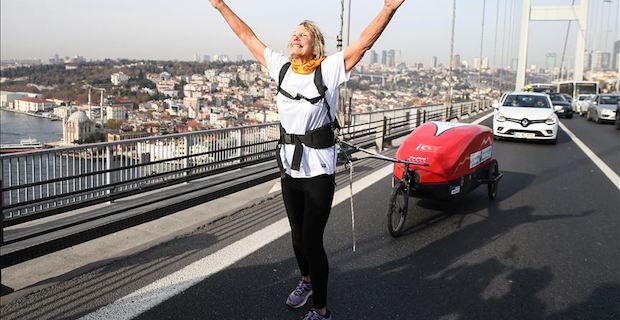 A septuagenarian British adventurer on Friday crossed Istanbul’s iconic Bosphorus Bridge on foot as part of a 6,000-mile journey to support the people of Nepal. “Here I go, I'm off again! I'm back in beautiful Istanbul and heading towards Bosphorus Bridge,” Rosie Swale Pope, 73, posted on Twitter along with a photo of her on the way to the looming bridge, spanning both sides of the Turkish metropolis.

“Tesekkur to all my new friends here!” she added, using the Turkish word for thanks.

Declaring herself “over the moon,” minutes later she wrote:

Pope, the author of several books, including Just A Little Run Around the World, is running solo to support U.K.-based charity PHASE Worldwide, which empowers isolated communities in Nepal.

For her bridge run, she had to get special permission from Istanbul’s Governorship, as the Bosphorus (15 July Martyrs) Bridge is not normally open for foot crossings.

In November, Pope crossed the border from Greece into Turkey, and earlier this month she crossed Istanbul’s Galata Bridge.

After a brief break in the U.K., Pope is back in Istanbul to continue her foot voyage to Katmandu, Nepal’s capital.

She began her Istanbul trek from Yildiz Park in the Besiktas district and took lots of selfies along the way.

“I have lost a big bite of my heart in Istanbul, I love you,” she told Anadolu Agency.

“Deeply honored and so excited, it’s a dream come true,” she added.

“I am 73 years old, I broke my legs, my hip two years ago but there is no finish line, we are all on one-way journey in life and we have to make the most of it and help each other,” Pope said.

Keywords:
British Runner
Your comment has been forwarded to the administrator for approval.×
Warning! Will constitute a criminal offense, illegal, threatening, offensive, insulting and swearing, derogatory, defamatory, vulgar, pornographic, indecent, personality rights, damaging or similar nature in the nature of all kinds of financial content, legal, criminal and administrative responsibility for the content of the sender member / members are belong.
Related News