DOLLAR 7.4504
EURO 9.0336
GOLD 440.134
BIST 1565
Covid-19 vaccinations begin for people aged 70 and over in England
Mesut Ozil to leave Arsenal and join Fenerbahce on free transfer, Avrupa...
Film industry comes to Meridian Water, this is incredibly exciting news...
Believing that a federation model in Cyprus would be a sustainable solution...
Altın Gün, Yüce Dağ Başında New single, video out now on Glitterbeat...
Mesut Ozil will only move to Turkey for Fenerbahce
WHO team touches down in China for COVID-19 probe
Trump becomes first US president to be impeached twice
Transformation of Old Street roundabout moves to next stage as road changes...
ANNUAL INVESTMENT ALLOWANCE REMAINS AT £1M UNTIL 2022

The importance of local newspapers to London's economy and communities

The Mayor to write to the CEO of Newsquest Group expressing further concern over the relocation of local media jobs outside London. 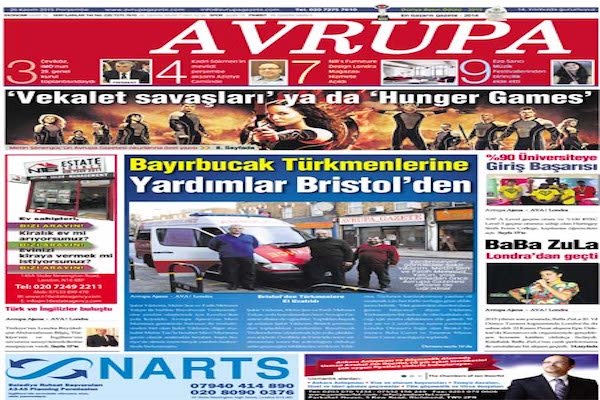 AVRUPA TURKISH NEWSPAPER/LONDON-Caroline Pidgeon AM, who proposed the motion, said:“Local newspapers are vital to maintaining local democracy and vibrant communities.At their best, local newspapers keep councils on their toes and ensure issues concerning residents are given a proper voice.Newsquest need to review their policies of centralising their news reporting and moving their reporters even further away from the areas and communities they are reporting on.”

Val Shawcross AM, who seconded the motion said:

“Local newspapers have always had a key role to play in local democracy in informing local people about issues that matter to them, but a large part of that success has come from being embedded in the communities they serve.

Boris Johnson has acknowledged the importance of local press, but warm words simply aren’t enough. With local jobs and local scrutiny at stake, it’s time the Mayor challenged Newsquest’s decision to move posts out of London because there’s a good chance it could mark the beginning of a tragic end for local newspapers.”

This Assembly agrees with the Mayor that local newspapers are part of the fabric of London’s local communities and play a vital role in informing people about grassroots subjects that matter to Londoners.

This Assembly believes that local newspapers continue to be a key source of information for many of London’s diverse communities, and perform a powerful public scrutiny function by holding local government and other organisations to account for their actions.

This Assembly is concerned by the recent announcement that Newsquest is to move eight posts on its titles in south London to its production centres in Weymouth and Newport – a move which the Assembly believes will threaten the quality and long term survival of local papers in south London.

This Assembly therefore calls on:

1) The Mayor to write to the CEO of Newsquest Group expressing further concern over the relocation of local media jobs outside London.

2) The Chair of the London Assembly’s Economy Committee, in consultation with party Group Leads, to include the contribution of local newspapers to London’s economy and their role in connecting local communities and businesses together in the list of future topics for possible investigation identified through the Committee’s work programme.”