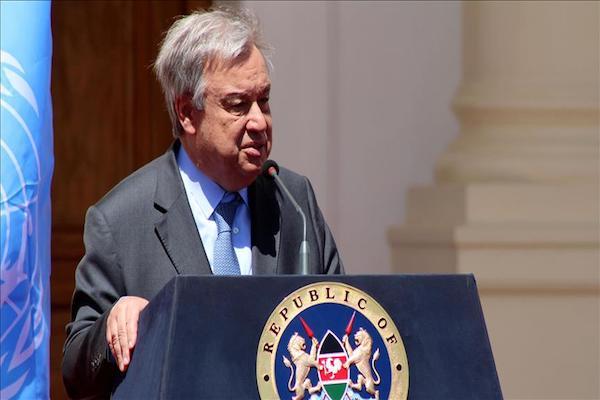 Over 11 million people in the region are estimated to be currently facing starvation. Guterres is in Kenya to raise awareness about the looming famine. Addressing a joint press conference with President Uhuru Kenyatta at the State House in the capital Nairobi on Wednesday, Guterres said the two leaders discussed several regional issues, including the conflict in South Sudan and the role of Kenyan troops in it; support for the African Union Mission in Somalia (AMISOM); and the drought that forced millions to face starvation.

“First of all, addressing the tragedy of the drought, people are dying, this must stop, the international community must act now. I want to express to the Kenyan government and the Kenyan people my full solidarity in relation to the drought that is affecting the country,” he said.

“I hope that the international community will be able to match the generosity that Kenyans have always shown in relation to refugees and support the country now that this drought has been prolonged in such a way that, of course, the resources of the country are themselves in difficulty to face this enormous challenge,” he added.

The UN chief also called on the international community to mobilize support for Somalis dying of famine.

Guterres also urged them to support the Somali government in building its capacity to collect taxes and develop its own security architecture to guarantee a functioning state in Somalia.

He also expressed deep respect and gratitude for Kenya’s commitment to peacekeeping and to peace enforcement in Somalia and the East African region. He said Kenyan forces play a very important role in bringing peace to South Sudan and Somalia.

Kenyatta thanked the UN chief for raising awareness on the worsening drought in Kenya.

“I want to thank you for supporting my government in addressing the drought situation in Kenya, which has been declared a national drought emergency; the UN together with the Red Cross and other partners are working hand-in-hand to respond to the drought situation and we truly appreciate [it],” he said.

“I was very encouraged by the support the secretary-general gave in the matter of the African Union Mission on Somalia [AMISOM]. We believe that if it is strengthened appropriately, then we will end the threat posed by al-Shabaab to Somalia and the region,” he added.

Later, Guterres visited Mathare slums to see and hear for himself the challenges faced by women as they strive for equality within the political process and raise awareness about gender violence as the world marks International Women's Day. The Kenyan government declared zero-tolerance to violence and discrimination against women and girls at the event.