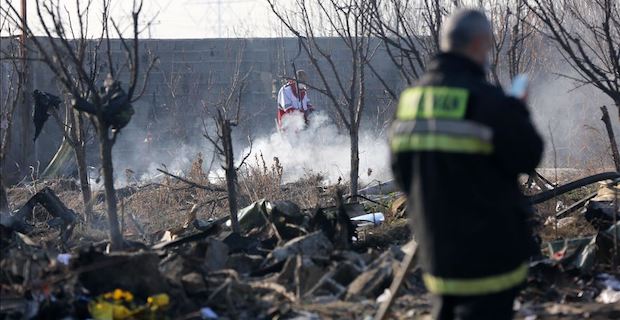 A missile hit and a terrorist attack are among the suspected causes of the deadly crash of a Ukraine plane in Tehran on Wednesday, according to Ukrainian officials.  The National Security and Defense Council of Ukraine (NSDC) said on Thursday that a third cause could be the engine explosion due to a technical glitch.

A NSDC statement said the trajectory of the aircraft showed the plane belonging to the International Airlines changed it route to return to the airport but pilots did not report any emergencies.

The crash killed all 176 passengers onboard shortly after it took off from Tehran’s international airport. It came at a time the Iranian army launched tens of ballistic missiles targeting U.S. troops in Iraq.

Iran’s attack was a retaliation over the assassination of Iran's Quds Forces leader, Qasem Soleimani in a U.S. drone strike last week.

Keywords:
UkrainePlane CrashTehran
Your comment has been forwarded to the administrator for approval.×
Warning! Will constitute a criminal offense, illegal, threatening, offensive, insulting and swearing, derogatory, defamatory, vulgar, pornographic, indecent, personality rights, damaging or similar nature in the nature of all kinds of financial content, legal, criminal and administrative responsibility for the content of the sender member / members are belong.
Related News