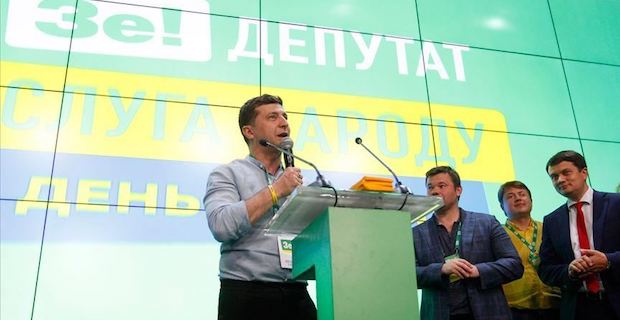 Ukrainian President Volodymyr Zelensky's Servant of the People Party has a commanding lead at the parliamentary elections with 95% of ballots counted, according to the data, announced by the country's Central Election Commission on Tuesday.

The party is far ahead of its closest rivals with 43.13% of votes.

Four more parties managed to cross the 5% threshold necessary to go into the Ukrainian parliament - the Verkhovna Rada.

Opposition Platform - For Life Party, considered pro-Russian, gets the support of 13.06% of the electorate.

Former Prime Minister Yuliya Tymoshenko's All-Ukrainian Union "Fatherland" Party with 8.18% of the votes is slightly ahead of the former President Petro Poroshenko's European Solidarity party, which gathered 8.12% and still can return to the third place after the final ballots count.

The Voice Party led by pop-singer Svyatoslav Vakarchuk got 5.84% and still stays on the brink of entering the parliament.

Ukraine held parliamentary elections on July, 21 after Zelensky, formerly a popular comedian, dissolved the parliament, Verkhovna Rada, during his swearing-in ceremony in May.

Voter turnout was one of the lowest in the history, only 49.84% of the voters came to the polls.

The elections did not take place in Crimea, a peninsula on the northern Black Sea coast annexed by Russia in 2014, and in the east of Ukraine, which is currently under control of pro-Russian rebels.

Keywords:
Ukrainian President Volodymyr ZelenskyFormer President Poroshenko
Your comment has been forwarded to the administrator for approval.×
Warning! Will constitute a criminal offense, illegal, threatening, offensive, insulting and swearing, derogatory, defamatory, vulgar, pornographic, indecent, personality rights, damaging or similar nature in the nature of all kinds of financial content, legal, criminal and administrative responsibility for the content of the sender member / members are belong.
Related News