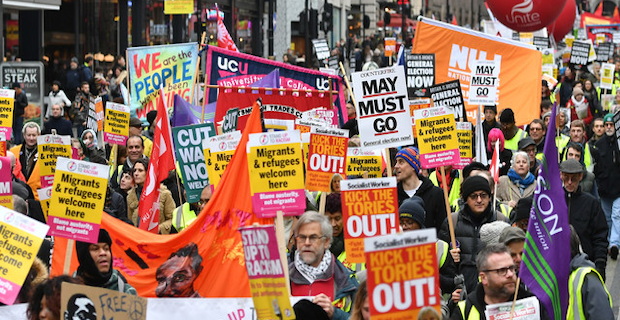 Thousands of people gathered outside parliament in central London on Thursday calling for a general election. The demonstration was organized by the opposition Labour party and saw its leader, Jeremy Corbyn, urge new Prime Minister Boris Johnson to call a general election and give the people the power to elect their own government.

Holding placards that read “No To Racism! No To Boris Johnson!” and “Rebuilding The Country For The Many, Not The Few”, protestors chanted Corbyn’s name as well as other pro-European Union and pro-Labour chants.

“We have a prime minister who has been elected by the few, leading a party of the few and will represent the few, not the many. It is time that he calls a general election and gives the people a say on who will govern them,” Corbyn said.

“Boris Johnson showed us today that he’s got no plan on Brexit, no plan to rebuild our public services and no plan to tackle the climate emergency. He's spent his leadership campaign promising tax giveaways to the richest. He'll work for the few. We'll work for the many.”

The opposition leader argued that as Johnson was chosen by a mere 92,000 members of the Conservative Party to lead a nation of over 60 million people, he had no mandate to govern.

Corbyn also reminded the crowd of angry protestors that Johnson’s policy on Brexit was largely unpopular with the general public and that the British people do not want to leave the EU without a deal.

The Labour leader warned that under the new government, the poor will get poorer and the rich richer with increased cuts to social and public spending and increased tax cuts to businesses and the wealthy few. Moreover, a Tory Brexit under Johnson would see a loss of jobs and economic productivity. 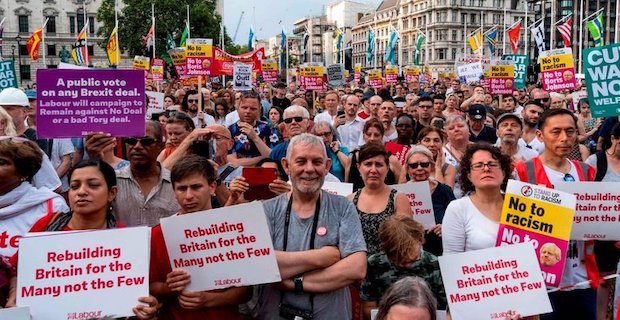 “Mr. Johnson talks about democracy and governing for all Britons. But how can he govern on an extremely thin majority with a hard right cabinet that will benefit only businesses and the wealthy few? If he truly cares about this nation, then he will call a general election and hand power back to the people,” Corbyn said.

Johnson is governing on a razor-thin majority of just two MPs which is expected to be reduced to one with the Liberal Democrats expected to win a local by-election seat held by the Conservatives, making him and his government unrepresentative.

“Boris Johnson wasn’t chosen by you. He was chosen by fewer than 100,000 unrepresentative Tory Party members,” Corbyn said.

“You deserve your say, whether that’s in a public vote on Brexit or in a General Election -- so that everyone has the chance to decide the future of our country.”

The demonstration follows Johnson’s first address as prime minister in the House of Commons, where he faced Corbyn, who presented a series of questions regarding his position on Brexit and national policies.

Johnson repeatedly stated that he will take the U.K. out of the EU by Oct. 31 with no exceptions and that although he is confident of negotiating a deal with Brussels, he is making preparations for a no-deal Brexit.

On Wednesday, the former foreign secretary appointed what has been described as the most right-wing and pro-Brexit cabinet, with Jacob Rees-Mogg the speaker of the House of Commons, Dominic Raab as foreign secretary and Priti Patel as home secretary.

Johnson was elected prime minister Tuesday by the membership of the Conservative Party after receiving 92,153 votes. He has repeatedly stated that he is in favor of leaving the EU without a deal and that the U.K. will prosper in such a scenario.

Keywords:
Boris JohnsonJeremy Corbyn
Your comment has been forwarded to the administrator for approval.×
Warning! Will constitute a criminal offense, illegal, threatening, offensive, insulting and swearing, derogatory, defamatory, vulgar, pornographic, indecent, personality rights, damaging or similar nature in the nature of all kinds of financial content, legal, criminal and administrative responsibility for the content of the sender member / members are belong.
Related News