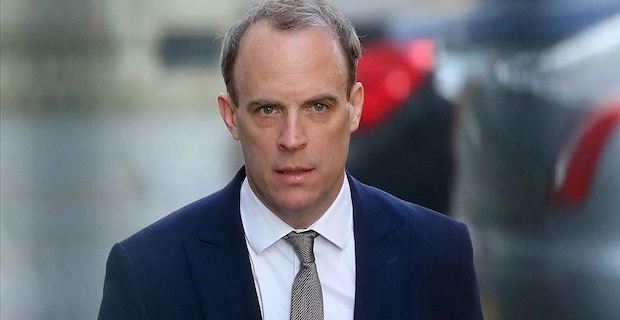 Britain on Monday said Israel's suspension of plan to annex parts of the occupied West Bank is an "essential step" towards a more peaceful Middle East. "It is important to build on this new dynamic, and ultimately only the government of Israel and the Palestinian Authority can negotiate the two-state solution required to secure lasting peace," Foreign Secretary Dominic Raab said in a statement. Raab's remarks came ahead of a visit "this week" to Israel and the occupied Palestinian territories. Raab will meet Israeli Prime Minister Benjamin Netanyahu and Palestinian President Mahmoud Abbas, according to a statement by Foreign and Commonwealth Office (FCO).

"Dominic Raab will emphasise the UK's strong and enduring commitment to Israel's security and stress the necessity of a negotiated two-state solution to realise justice and security for both Israelis and Palestinians," it said, without specifying the date of the visit.

"He will also stress the need for a resumption of Israeli-Palestinian dialogue and wider cooperation on development, trade and coronavirus," it added.

Raab will "press for renewed dialogue between their governments and reinforce UK commitment to preventing annexation and pursuing a negotiated two-state solution."

The FCO also said: "The visit comes following the announcement that the UAE and Israel would normalise relations; a move the UK welcomed as a much-needed boost for peace in the region.

"The UK has consistently encouraged a solution that allows justice and security for both Israelis and Palestinians."

The deal to normalize the United Arab Emirates-Israel ties was announced by US President Donald Trump earlier in the month, forestalling Israel's controversial plans to annex large swathes of the occupied West Bank.

A joint statement by the US, the UAE and Israel said the "breakthrough" would promote "peace in the Middle East region and is a testament to the bold diplomacy and vision of the three leaders," referring to Trump, Abu Dhabi Crown Prince Mohammed bin Zayed al-Nahyan and Israeli Premier Benjamin Netanyahu.

Turkey said the agreement was "stillborn" and "completely invalid," adding the UAE disregarded the will of Palestinians.

A Foreign Ministry statement read: "While pursuing its narrowly defined interests, the UAE has attempted to present its betrayal to the Palestinian cause as an act of altruism. The history and the conscience of the people in the region will never forget or forgive this hypocritical act."

Keywords:
Dominic RaabUKIsraelPalestineBritish Foreign Secretary
Your comment has been forwarded to the administrator for approval.×
Warning! Will constitute a criminal offense, illegal, threatening, offensive, insulting and swearing, derogatory, defamatory, vulgar, pornographic, indecent, personality rights, damaging or similar nature in the nature of all kinds of financial content, legal, criminal and administrative responsibility for the content of the sender member / members are belong.
Related News