Foreign ministers of Turkey, Russia and Iran will gather in Moscow on Saturday to discuss the cooperation within the framework of the Astana mechanism 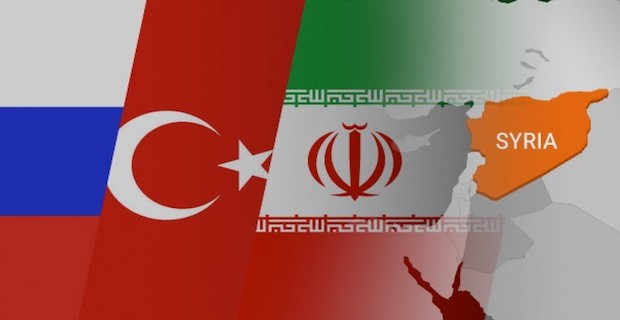 AVRUPALONDON - According to a statement issued by the Turkish Foreign Ministry, Foreign Minister Mevlut Cavusoglu, his Russian counterpart Sergey Lavrov and Iran's Javad Zarif will meet in Moscow on April 28.“The meeting will focus on all aspects of the cooperation carried out within the framework of the Astana mechanism and elaborate on the steps that could be taken from now on.”The Astana peace talks were launched on Jan. 23-24, 2017, with the aim of putting an end to violence and improving the humanitarian situation in war-torn Syria.

Kazakhstan hosted eight meetings attended by representatives from the guarantors states -- Russia, Turkey, and Iran -- that brokered a cease-fire in Syria in December 2016, leading to the Astana peace talks running parallel to the Geneva talks.

Syria has been locked in a vicious civil war since 2011 when the Bashar al-Assad regime cracked down on pro-democracy protests with unexpected ferocity.

Since then, hundreds of thousands of people have been killed in the conflict, according to the UN.

Keywords:
SyriaForeign MinistersTurkishRussianIranian Foreign Ministers
Your comment has been forwarded to the administrator for approval.×
Warning! Will constitute a criminal offense, illegal, threatening, offensive, insulting and swearing, derogatory, defamatory, vulgar, pornographic, indecent, personality rights, damaging or similar nature in the nature of all kinds of financial content, legal, criminal and administrative responsibility for the content of the sender member / members are belong.
Related News