Turkish president speaks during meeting with his Russian counterpart in Moscow 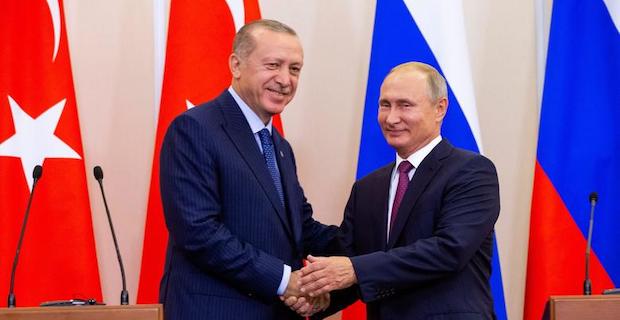 Turkey and Russia are together taking significant steps in Syria, Turkish president said on Monday.

"Another significant step taken with Russia is to cooperate against terrorist acts in Syria," Recep Tayyip Erdogan said at a meeting in Moscow with his counterpart Vladimir Putin.

This is the third meeting of the two leaders since the beginning of 2019.

Erdogan will attend the 8th High-Level Cooperation Council meeting between the two countries.

Later, Erdogan and Putin will attend an opera titled Troy, based on the Greek epic, in the opening ceremony of cross-year of culture and tourism.

The opera will be performed by Turkish singers at Russia's Bolshoi Theatre.

The 2019 was announced a cross-year of Turkish-Russian culture and tourism in the two countries.

Keywords:
Vladimir PutinSyriaRecep Tayyip ErdoganTurkeyRussiaTurkish President
Your comment has been forwarded to the administrator for approval.×
Warning! Will constitute a criminal offense, illegal, threatening, offensive, insulting and swearing, derogatory, defamatory, vulgar, pornographic, indecent, personality rights, damaging or similar nature in the nature of all kinds of financial content, legal, criminal and administrative responsibility for the content of the sender member / members are belong.
Related News