‘Europe should have taken them back after numerous requests. They should do it now,’ says US president 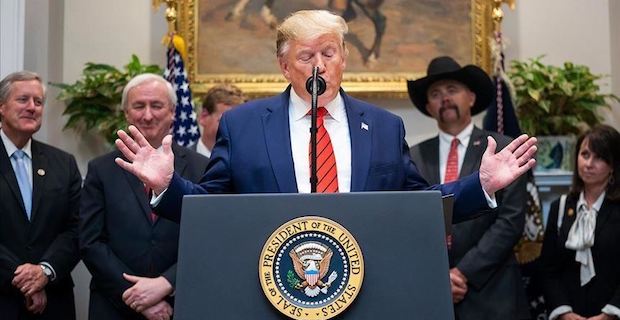 The U.S. President Donald Trump Sunday called on European countries to take Daesh prisoners back to their country of origins. “Europe should have taken them back after numerous requests. They should do it now,” said Trump on Twitter. “The U.S. has the worst of the ISIS prisoners,” he said, using another name for Daesh terror group.

“Turkey and the Kurds must not let them escape,” said Trump.

“They will never come to, or be allowed in, the United States,” he added.

Amid its ongoing anti-terror operation in northern Syria, Turkey said on Saturday it will assume the responsibility of Daesh elements held in detention centers in northern Syria falling inside Turkey’s newly launched operation east of the Euphrates River.

Turkey will undertake surveillance of the Daesh elements in detention centers and their families in camps located in the areas to be cleared of YPG/PKK terrorists, the Foreign Ministry said.

The sustainable solution could be achieved if foreign terrorist fighters and their families in Syria were to be returned to their countries of origin, put on a trial and rehabilitated, it added.

Ankara wants to clear northern Syria east of the Euphrates of the terrorist PKK and its Syrian offshoot, the PYD/YPG.

In its more than 30-year terror campaign against Turkey, the PKK -- listed as a terrorist organization by Turkey, the U.S., and the European Union -- has been responsible for deaths of 40,000 people, including women, children and infants.

Keywords:
TrumpDaesh PrisonersDaesh
Your comment has been forwarded to the administrator for approval.×
Warning! Will constitute a criminal offense, illegal, threatening, offensive, insulting and swearing, derogatory, defamatory, vulgar, pornographic, indecent, personality rights, damaging or similar nature in the nature of all kinds of financial content, legal, criminal and administrative responsibility for the content of the sender member / members are belong.
Related News