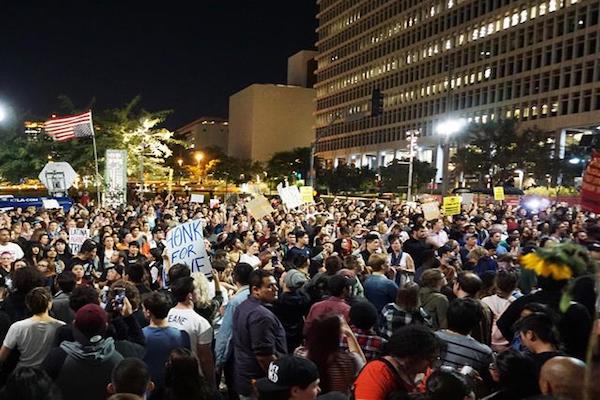 NEW YORK-Americans on Thursday continued to protest a stunning presidential election victory by Donald Trump as he struck a humble tone in a first vis-à-vis meeting with Barack Obama.

“Just had a very open and successful presidential election. Now professional protesters, incited by the media, are protesting. Very unfair!” he tweeted.

Meanwhile, in front of his Trump International Hotel in Washington, DC, protesters yelled into the night, “Impeach Donald Trump”.

In Los Angeles, demonstrators took to the streets near City Hall and torched a giant Trump effigy, the Los Angeles Times reported.

A second day of protests in front of the Trump Tower in New York saw demonstrators chanting, “Hey, hey, ho, ho, Donald Trump has got to go”.

In downtown Boston, thousands of anti-Donald Trump protesters poured out to voice their discontent, shouting chants of "Trump's a racist" while carrying signs that read "Impeach Trump" and "Abolish Electoral College”, according to media reports.