TRNC Presidency condemn the sanction decision of the US against Turkey

The TRNC Presidency condemned the United States regarding the sanction decision taken against Turkey. 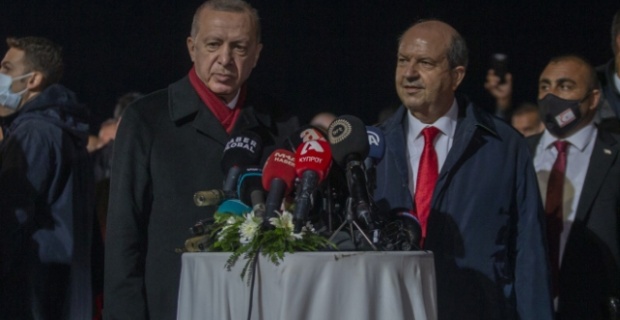 Turkish Republic of the Norhern Cyprus ( TRNC) Presidency condemn the sanction decision of the US against Turkey. In the statement of the TRNC Presidency which evaluated the sanction decision of the US against Turkey it is stated "Turkey condemned the US sanction decision taken on the 14th December 2020 due to the purchase of S-400 air defence systems. The decision against Turkey, which is one of NATO's most important members, is incompatible with the alliance relationship.”The statement, which mentions that the USA decided to impose an embargo on the grounds of the Peace Operation that saved Turkish Cypriots from mass murder in 1974, reminded that the US lifted the arms sales embargo which was imposed on the Greek Cypriot Administration and also continues: "The Republic of Turkey took a decision as a sovereign country to strengthen its own defence. The United States should respect this decision”.

The statement also notes: “We support Motherland Turkey’s constructive proposal to resolve the issues through dialogue and diplomacy and we expect the US to reconsider this wrong decision”.

Saner: ‘It is extremely wrong to impose sanctions on Turkey’

The Turkish Republic of Northern Cyprus (TRNC) Prime Minister Ersan Saner stated that the decision of the US to impose sanctions on Turkey was extremely wrong.

Prime Minister Saner underlined that Turkey is the "sole guarantor” for the Turkish Cypriot people's existence on the island and the sovereignty of the TRNC. Moreover, power and accurate policies of Turkey made it the most important component for peace and stability in the Eastern Mediterranean and Cyprus.

Saner said ‘It is extremely wrong to impose sanctions on Turkey just because it purchased S-400 missiles for its own stability and for the stability of the region.’ The TRNC Prime Minister also added that the US had made "contradicting moves and wrong choices" by lifting the arms embargo on the Greek Cypriot Administration, which is not a member of NATO, unlike Turkey, whereas the US refused to sell Patriot missiles defence systems as well as failing to fulfil its promises to Turkey under the joint F-35 fighter jet project.

Saner pointed out that the US should revert from its mistake and develop healthy relations with Turkey.

Keywords:
TRNC PresidencySanction DecisionUS Against Turkey
Your comment has been forwarded to the administrator for approval.×
Warning! Will constitute a criminal offense, illegal, threatening, offensive, insulting and swearing, derogatory, defamatory, vulgar, pornographic, indecent, personality rights, damaging or similar nature in the nature of all kinds of financial content, legal, criminal and administrative responsibility for the content of the sender member / members are belong.
Related News