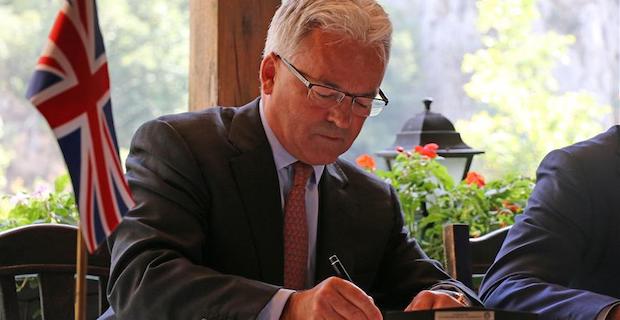 Britain’s Minister for Europe Sir Alan Duncan commenced a visit to Turkey on Sunday to represent his country at Turkey’s 95th Republic Day ceremonies and the opening of a mega airport in Istanbul on Monday.

“The most important day in the year for Turkey, it marks the proclamation of the Turkish Republic by the Turkish Grand National Assembly on 29 October 1923,” it said.

Duncan will also attend the opening ceremony of Istanbul’s new airport, it added.

He will join Turkish President Recep Tayyip Erdogan and Foreign Minister Mevlut Cavusoglu in the opening ceremony of the airport which will “contribute to Istanbul’s role as one of the world’s leading transit hubs".

“This is a truly historic moment for Turkey – celebrating its Republic Day at the same time as opening a brand new international airport – and I’m proud to be representing the U.K. in Istanbul,” Duncan said ahead of his visit.

“Turkey has always been, and will continue to be, a close ally and friend of the U.K.,” he said.

Phase one of Istanbul’s new airport with an annual capacity of 90 million passengers is ready for its official opening on Monday.

The inauguration ceremony will take place on Republic Day, the 95th anniversary of the founding of the Turkish Republic, with the attendance of President Recep Tayyip Erdogan and more than 50 foreign leaders, ministers, and high-level officials.

The €6-billion ($7.2 billion) first stage, which was built in nearly three years through a public-private partnership model, is among a set of mega projects planned as part of a series of objectives for Turkey’s 2023 centennial.

On Monday, two runways -- 3,750 and 4,100 meters long -- will go into service as a part of the first phase, including three separate airstrips.

Keywords:
Sir Alan DuncanSenior British
Your comment has been forwarded to the administrator for approval.×
Warning! Will constitute a criminal offense, illegal, threatening, offensive, insulting and swearing, derogatory, defamatory, vulgar, pornographic, indecent, personality rights, damaging or similar nature in the nature of all kinds of financial content, legal, criminal and administrative responsibility for the content of the sender member / members are belong.
Related News