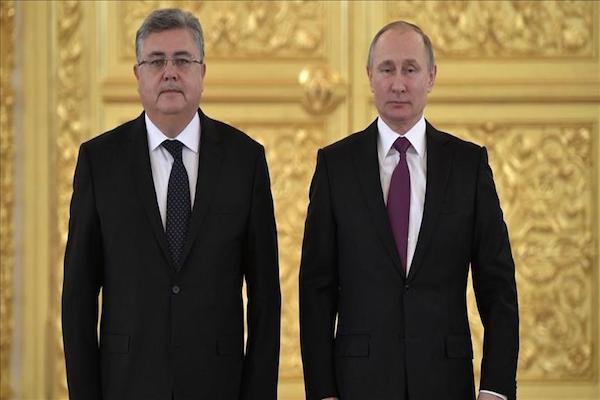 "Our relations with Turkey are steadily returning to normal, to the benefit of both countries," the Kremlin said in a statement.

Putin's remarks came during a ceremony in the Grand Kremlin Palace, where he received letters of credence from 18 foreign ambassadors, including Ankara's ambassador in Moscow, Huseyin Dirioz.

Putin said he had a "very productive" meeting with his Turkish counterpart Recep Tayyip Erdogan on March 10 in Moscow, where they discussed energy projects and fighting against terrorism in Syria.

"Energetic efforts by Russia and Turkey were very instrumental in bringing about a ceasefire between the Syrian government forces and the armed opposition.

"We know the role Turkey played in this and value it highly. This made it possible to organise the peace negotiations on Syria in Astana," Putin said, referring to the talks in the Kazakh capital.

The Astana talks, which focused on the cease-fire that came into effect Dec. 30, have been brokered by Turkey, which backs the opposition, and Russia and Iran, who support the Bashar al-Assad’s regime.

Following the Dec. 30 cease-fire, the first round of Astana talks were held on Jan. 23 and 24. There, Turkey, Russia and Iran established a trilateral mechanism to observe and ensure full compliance with the cease-fire in Syria.

The second round was held on Feb.15 and 16 while the third round ended Wednesday.

The Russian-Turkish relations entered a new phase after Putin and Erdogan met in Moscow for the sixth High-Level Cooperation Council last Friday. Erdogan said the normalization process between Ankara and Moscow, which started late last summer, was over.