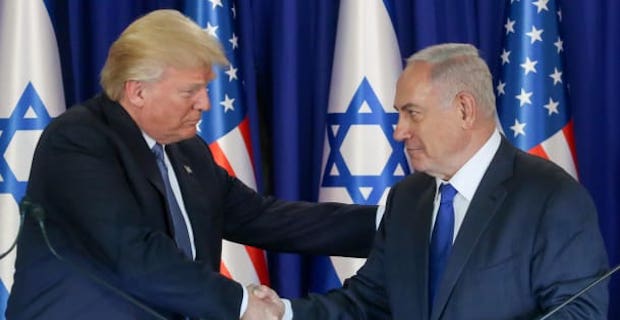 His ratings have soared especially after recognizing Jerusalem as the capital of Israel in 2018 and Israel-occupied Golan Heights as sovereign Israeli territory this week.

Both unilateral actions were slammed by the international community and governing bodies, the UN and EU in particular.

Israeli lobbies in the U.S. were cautious of a Trump presidency in the run up to the 2016 elections.

Nevertheless, immediately after his election as the 45th U.S. president, Trump quickly became the long-awaited advocate of the Israelis, pushed both by the deep pro-Zionist ties of his son-in-law and advisor Jared Kushner, and political balancing efforts in the face of relentless Democratic pressure to impeach him on charges of collusion with Russia and obstruction of justice in an ongoing legal case.

At the end of a strenuous two-year campaign led by the Democrats to oust Trump, investigation of the Special Counsel Robert Mueller concluded Sunday that there was no collusion in the 2016 elections, allowing Trump a sigh of relief.

Many of Trump’s senior officials are in a race to maintain good relations with Israel, condoning illegal Israeli settlements in the West Bank or the killing of civilians in Gaza.

In 2018 alone, the Trump administration estranged Palestinians by moving the U.S. embassy in Israel to Jerusalem and ending funding of $65 million for the UN Relief and Works Agency, that provides aid for 5 million Palestinian refugees across the region.

The U.S. continued this streak in early February by cutting all aid to the occupied West Bank and Gaza Strip, in another gesture to Israeli lobbies.

Decried by Palestinians and described as "a declaration of war" on peace efforts by the Washington, the U.S. State Department closed down the Washington office of the Palestinian Liberation Organization (PLO) on grounds that it "has not taken steps to advance the start of direct and meaningful negotiations with Israel".

Embracing a long-standing demand from Tel Aviv, Trump ripped up a 2015 deal with Iran and imposed crippling new economic sanctions on Tehran.

In addition, Trump’s anti-Muslim rhetoric and his administration’s controversial Muslim ban in 2017 went down well in Israeli circles.

Israeli lobbies have used this discourse to stifle freedom of speech in American universities and silence progressives, liberals and Muslim congresswomen in the U.S. who are critical of Israeli policies.

Aspiring to stop the growth of the Boycott, Divestment, Sanctions (BDS) movement, Israel uses anti-Semitism as a weapon to crush any critic of the government of Israel.

BDS works to end international support for Israel's oppression of Palestinians and pressure Israel to comply with international law, according to its website.

Furthermore, Trump has pushed his close ties with Gulf Arab states to advance the Israeli government’s strategy to build a pro-Israel bloc in the region at the expense of the Palestinian cause.

In a latest such move, Trump formally recognized Israeli sovereignty on Monday over the Israel-occupied Syrian Golan Heights, another controversial move that reversed decades of U.S. policy.

Emboldened by the Trump administration's fast-paced realization of Israeli goals, Israel is not talking about a two-state solution any longer.

Keywords:
President Donald TrumpDonald TrumpIsrael
Your comment has been forwarded to the administrator for approval.×
Warning! Will constitute a criminal offense, illegal, threatening, offensive, insulting and swearing, derogatory, defamatory, vulgar, pornographic, indecent, personality rights, damaging or similar nature in the nature of all kinds of financial content, legal, criminal and administrative responsibility for the content of the sender member / members are belong.
Related News