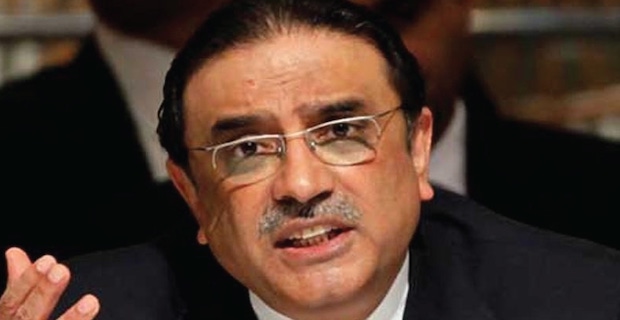 Pakistani government on Wednesday announced it was going to file a reference against embattled former President Asif Ali Zardari to seek his disqualification for allegedly hiding foreign assets.

Information Minister Fawad Chauhdry told reporters in capital Islamabad that the ruling Pakistan Tehreek-e-Insaf (PTI) party leaders would file a reference in the election commission against the former president for not disclosing his assets, particularly a posh apartment in New York, before contesting the July 2018 elections.

Zardari was elected as a member of the lower house -- the National Assembly -- from his hometown Nawabshah of southern Sindh province in the last general elections.

Khurram Sher Zaman, a PTI parliamentarian, told local broadcaster ARY News that the reference would be filed on Thursday.

The development came days after Zardari, who is also the co-chairman of center-left opposition, Pakistan People’s Party (PPP), in a thinly-veiled reference accused the country’s powerful military of meddling in politics and bringing the PTI government in power.

He also claimed that a “conspiracy” was being hatched to have him arrested before advent of the new year.

The former president is also facing inquiry in a money-laundering scam, which involves transactions of billions of Rupees through fake accounts.

The PPP, for its part, rebutted the government allegations, terming them “baseless” and “devoid of truth.”

“Asif Zardari has declared all his assets before contesting the elections”, Qamar Zaman Kaira, a central PPP leader and a former information minister told reporters.

“The government is just trying to divert the public attention from its failures through these gimmicks. We will not be cowed down by these attempts”, he added.

Zardari’s PPP, which has ruled the country four times since its inception in 1967, came third in the July elections securing 51 seats in 342-member National Assembly. It is currently ruling the Sindh province -- its stomping ground -- for the record third time in a row.

Keywords:
Pakistani GovAsif Ali Zardari
Your comment has been forwarded to the administrator for approval.×
Warning! Will constitute a criminal offense, illegal, threatening, offensive, insulting and swearing, derogatory, defamatory, vulgar, pornographic, indecent, personality rights, damaging or similar nature in the nature of all kinds of financial content, legal, criminal and administrative responsibility for the content of the sender member / members are belong.
Related News