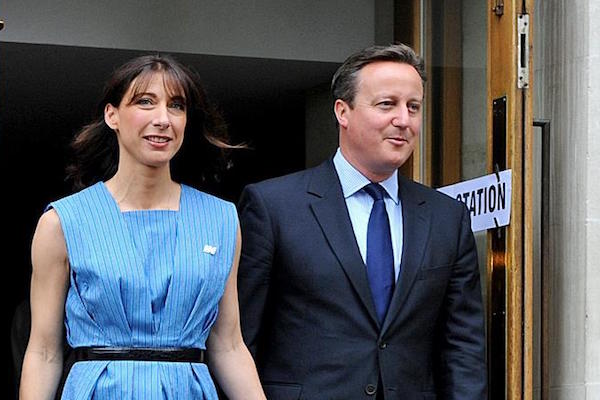 In addition to U.K. nationals, the electoral register includes citizens from the Republic of Ireland and Commonwealth countries such as Australia and Canada who are resident in Britain. Citizens of other EU countries are not eligible to vote.

Turnout is expected to be high, with some analysts predicting it could exceed 80 percent – which would make it the most popular U.K. election in more than half a century.

The ballots will be taken to local election centers to be counted immediately after the polls close at 10 p.m. The first results are expected from northeast England, traditionally a more Eurosceptic area, at around 1 a.m. Friday morning.

Britain’s largest cities, including Birmingham, Manchester and districts in London and Scotland, should start declaring their results around two hours later.

The U.K.'s Electoral Commission said it expected the official result to be announced in Manchester at around 8 a.m. [0700 GMT] Friday.

It was called by Prime Minister David Cameron in February, after he spent months talking to leaders of other European countries in an attempt to renegotiate Britain’s EU membership terms.

Cameron assumed leadership of the campaign to remain in the EU after agreeing what he termed a “special status” for the U.K. The deal with European leaders included recognition of Britain’s place outside the single European currency and further political integration. It also restricted welfare payments for EU citizens who migrate to other countries.

But Vote Leave, the pro-Brexit campaign, ridiculed the renegotiation as a failure. It argued that Britain faced a better future by relieving itself of the rules and regulatory structure of EU institutions like the European Parliament and European Court of Justice.

While arguing the need to “take back control”, the Leave campaign also highlighted immigration fears – including the prospect of Turkish membership of the EU – as a reason for Brexit.

The wealth of international opinion has been in favor of a vote to Remain. The International Monetary Fund, the OECD and NATO have all warned a British exit would have consequences for Europe’s economy and security.

World leaders from U.S. President Barack Obama to Chinese President Xi Jinping have called for the U.K. to stay.

Opinion polls have given no strong indication of what the referendum’s outcome might be. A survey by Opinium on Wednesday afternoon found the two sides were in a “statistical dead heat”, placing Leave on 45 percent and Remain on 44 percent.

Political betting firms were being more definitive. Gambling company Ladbrokes said on Wednesday there was a 74 percent chance of a Remain vote, but added the likelihood of a Leave result had increased in the last days of the campaign.