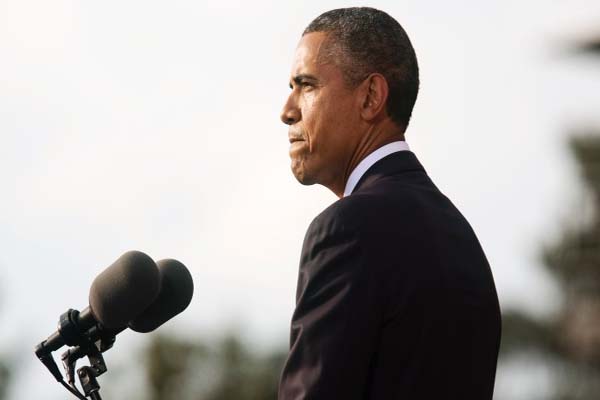 Barack Obama on Wednesday scrapped part of a long-planned trip to Asia and left the remainder of the trip in doubt as a U.S. government shutdown went into a second day with no end in sight to the funding battle in Congress that triggered it. Obama scuttled two stops on a planned four-country tour and left visits to two other countries up in the air, according to White House statements. The president told his counterparts in Malaysia and the Philippines he would not be able to meet them as planned and a White House official said the president is weighing whether to attend diplomatic summits in Indonesia and Brunei. "We will continue to evaluate those trips based on how events develop throughout the course of the week," National Security Council spokeswoman Caitlin Hayden said. Obama was originally due to leave the United States on Saturday and return a week later. Not only must the president deal with the budget impasse and its effects, but he faces an even bigger crunch in Congress, which will put the United States at risk of defaulting on its debts if it does not raise the limit on U.S. public debt. Treasury Secretary Jack Lew has said the United States will exhaust its borrowing authority no later than October 17.

The fight between Obama's Democrats and the Republicans over the government's borrowing power is rapidly merging with the standoff over everyday funding, which has forced the first government shutdown in 17 years and sent hundreds of thousands of federal employees on unpaid leave.

The White House announcements about the Asia trip followed a fruitless day on Capitol Hill, with congressional Democrats and Republicans coming no closer to resolving their differences.

Republicans in the House of Representatives view the Affordable Care Act as a dangerous extension of government power, and have coupled their efforts to undermine it with continued efforts to block government funding. The Democratic-controlled Senate has repeatedly rejected those efforts.

The standoff has raised new concerns about lawmakers' ability to perform their most basic duties and threatens to hamper a still fragile economic recovery.

"This is a mess. A royal screw-up," said Democratic Representative Louise Slaughter of New York.