MPs prepare for votes in bid to break deadlock

MPs are preparing to vote for their preferred Brexit option, with the PM due to meet Tory backbenchers in an effort to win them over to her deal. 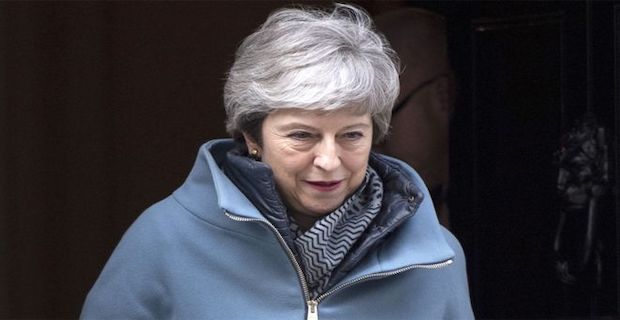 Some have suggested Theresa May must name the date she will step down to have any hope of winning MPs' approval for her deal at the third attempt.

The BBC's Laura Kuenssberg said some leading Brexiteers were "tiptoeing their way" towards supporting her plan.

Jacob Rees-Mogg has said of the deal: "Half a loaf is better than no bread."

He told BBC Radio 4's Today programme he did not "begin to pretend this is a good deal or a good choice", but he would support the PM's plan if it had the backing of the Democratic Unionist Party.

The 10 Northern Irish MPs are seen as the key to securing the deal, but they have urged Tory MPs to "stand firm" in their opposition unless there were "significant changes".

Commons leader Andrea Leadsom said the government was still in talks to persuade the DUP to back it, along with other MPs on their own benches.

Meanwhile, the President of the European Council Donald Tusk told MEPs they "cannot betray the six million people who signed the petition to revoke Article 50, the one million people who marched for a people's vote, or the increasing majority of people who want to remain in the EU".

Having voted to seize control of Commons business, backbench MPs will vote on Brexit alternatives later.

The Speaker will select around half a dozen options, with MPs marking on paper each option with a "yes" or "no".

The process is likely to continue into next week. However, it is unclear whether MPs will be free to vote as they wish or will take orders from party leaders.

Former health minister Steve Brine, who resigned on Monday to back the move to force indicative votes, told BBC Newsnight more than a dozen others might quit government roles if they are denied a free vote.

Ms Leadsom said it was a decision for Mrs May and the chief whip, but added that the votes gave her a "big cause for concern" as the government should be in charge of the Commons.

However, her cabinet colleague, Work and Pensions Secretary Amber Rudd, told reporters: "It's an important opportunity for the House to show its voice and say what it will accept rather than constantly saying what it won't accept."

Timetable for Wednesday in Parliament

By 14:00: MPs take control of the Commons to debate the process of indicative votes

By 15:00: MPs vote on the procedure for indicative votes

15:15: The Speaker announces which Brexit proposals he has chosen to be debated and voted on, and the debate begins

19:00: MPs vote with paper and pen for their preferences

21:15: The Speaker announces the results of the indicative votes - though he could announce them earlier during SI debate

Labour's shadow international trade secretary Barry Gardiner told Today he expected there to be a free vote for his party's MPs later, but that they would be expected to rule out supporting a no-deal Brexit and revoking Article 50 in line with their manifesto.

"We have committed ourselves to trying to deliver the referendum result," he said. "The Labour party is not a remain party now."

Meanwhile, the Scottish Parliament is expected to formally back calls for Brexit to be cancelled in a vote later.

What is the PM's next move?

Mrs May continues to try to win MPs round to her deal, which has been heavily rejected twice. She is expected to address the backbench 1922 Committee ahead of Wednesday's debate.

Ms Leadsom said there was a "real possibility" the PM's deal could come back for a vote on Thursday or Friday, adding: "If we could simply get the withdrawal agreement bill under way…once we have done that, once we have left the EU, we can then look at what our future relationship will look like."

Friday is the day written into law for the UK to leave the EU, but later MPs will vote on a statutory instrument to confirm a delay - with the earliest Brexit is likely to happen now being 12 April.

Keywords:
Laura KuenssbergBrexit
Your comment has been forwarded to the administrator for approval.×
Warning! Will constitute a criminal offense, illegal, threatening, offensive, insulting and swearing, derogatory, defamatory, vulgar, pornographic, indecent, personality rights, damaging or similar nature in the nature of all kinds of financial content, legal, criminal and administrative responsibility for the content of the sender member / members are belong.
Related News