Evo Morales stepped down Sunday amid protests over election results 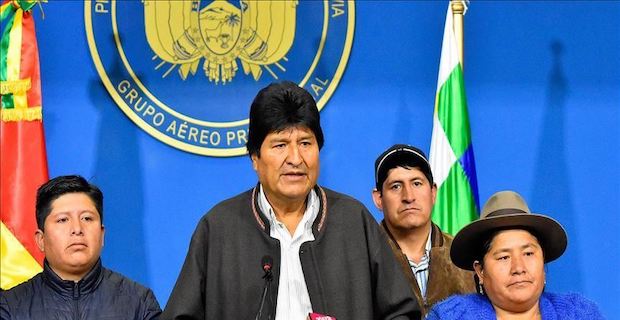 Mexico announced Monday that it is granting asylum to former Bolivian President Evo Morales, who resigned over the weekend amid protests over irregularities in last month’s presidential elections.  “Mexico has decided to grant [Morales] asylum on humanitarian grounds. In Bolivia, his life and his integrity are in danger,” Foreign Secretary Marcelo Ebrard said in a press conference.

The Mexican government said Sunday that it would offer asylum to the ex-president, but Morales officially requested and was granted sanctuary Monday afternoon.

Bolivia has been thrown into turmoil with demonstrators protesting the results of presidential elections in October in which Morales declared victory for the fourth time.

Following the elections, protesters took to the streets, saying there were inconsistencies with the results. Due to the protests, Morales resigned Sunday.

From the beginning, Mexico was one of the more supportive countries for Morales. In October, the Mexican representative at the Organization of American States said other countries should respect Bolivia’s election process.

“Mexico…is staying prudent and respects the development of the electoral process with the confidence that it will be the judgment of the Bolivian people [to decide the outcome],” said Mexican representative Luz Elena Banos Rivas.

Mexican President Andres Manuel Lopez Obrador has also spoke in favor of Morales. He applauded the former Bolivian president on Twitter for stepping down instead of “exposing his people to violence.”

Keywords:
Bolivian PresidentEvo MoralesMexico
Your comment has been forwarded to the administrator for approval.×
Warning! Will constitute a criminal offense, illegal, threatening, offensive, insulting and swearing, derogatory, defamatory, vulgar, pornographic, indecent, personality rights, damaging or similar nature in the nature of all kinds of financial content, legal, criminal and administrative responsibility for the content of the sender member / members are belong.
Related News