CTCA history of the community’s presence in the UK for 100 years since the first migrants arrived at the end of 1917, 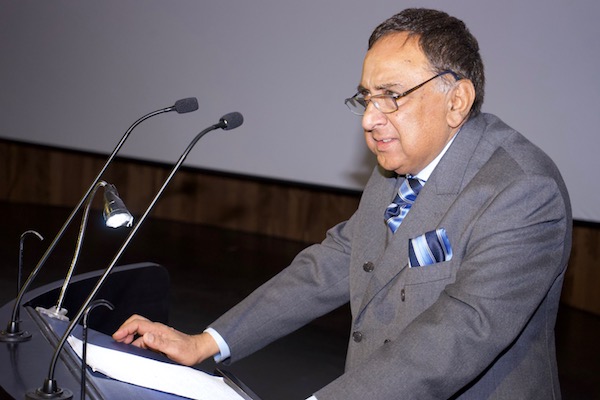 In his welcoming speech, previous CTCA Chair Çetin Ramadan gave a potted history of the community’s presence in the UK for 100 years since the first migrants arrived at the end of 1917, after Britain had formally annexed Cyprus from the Ottoman Empire in 1878. He spoke of why Turkish Cypriots migrated to Britain, Australia, Canada, US and Turkey and this was mostly because of political and financial reasons, and how they have made big cultural and economic contributions to those countries.

CTCA Chair Leyla Kemal mainly talked about the history of Turkish Cypriot civil society activities in the UK since 1951: “CTCA is committed to serving the British Turkish Cypriot community and as a highly-respected organization of elected volunteers, since its inception on 9 March 1983, it works relentlessly to pursue the interests of this group and its associations. It is actively involved in several civic duties as well as promoting, supporting and organizing high profile events such as the recent first-ever Turkish Cypriot Festival with the attendance of over 20,000 people and the Gala Dinner rewarding the high achievers of the community.” She ended her talk by urging British Turkish Cypriots to “continue to support CTCA, because united we can achieve more”.

Opening speeches had some common themes such as “Turkish Cypriot community, who had to migrate from the island, had suffered enough”, “It is time to recognize the TRNC”, and “the Turkish Cypriot community should have equal rights with the rest of the world such as being able to fly to their country directly”. Lord Sheikh, who defines himself as a friend and supporter of the Turkish Republic of North Cyprus, talked about his role, founding the All Party Parliamentary Group for the TRNC. He praised educational achievements in the TRNC and expressed his excitement to be a part of this event marking the 100 years of migration. After him, TRNC London Representative Zehra Başaran said “The largest diaspora lives in London" and "more Turkish Cypriots live in diaspora than in Northern Cyprus".  She also said "Turkish Cypriots are a remarkable people who by adapting to change have managed to maintain their roots and culture". Turkish Ambassador’s Undersecretary Güçlü Cem Işık said he was proud to attend this historic event and he also praised the successes of British Turkish Cypriots.

After the speeches, “My Heart Belongs to…….100 years of Turkish Cypriot Migration to the UK”, a documentary featuring interviews from a cross-section of Turkish Cypriot migrants, had two different screenings. To commemorate the 100 years of migration, CTCA commissioned this movie which explores early life in Cyprus, reasons for migration, challenges and joys of living in the UK and feelings of home, drawing on testimonials of CTCA Chair Leyla Kemal, Kazim Altan, Türker Çakıcı, Alan Hickmet, Nesrin Sitki, Ibrahim Hüseyin, Netice Hüseyin, Demet Hüsein, Eddie Ertan, Galip Ahmet, Halil Basaran, Orhan Basharan, Teyfik Zekai, Mehmet and Zehra Ramadan. After the Q&A session CTCA presented trophies to the participants in the movie, to the producers Eithne Nightingale and Mitchell Harris, to Janet Browne from the V&A Museum, Semra Eren-Nijhar, Limasollular Association and Turkish Women's Philanthropic Association (TWPA) for their contributions to the event.

During the event, the V&A also hosted Semra Eren Nijar’s photo exhibition called “My Journey from Güvercinlik (Pigeon-loft)” which included photos by İsmail Veli, folklore shows by Dr. Fazıl Küçük Turkish School and Hornsey Atatürk Turkish School, and a Cypriot corner displaying handicrafts. CTCA is also working on the preparations of 2018’s festival. Details will be announced next month.