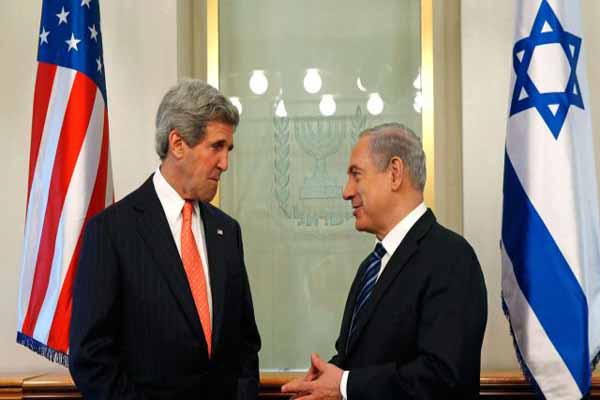 Speaking at the end of his second visit to the region in just a week, Kerry said the two sides were discussing a framework for a final-status accord to resolve the core issues at the heart of the decades-old conflict. "Both parties remain committed to fulfilling their obligations to stay at the table and negotiate hard during the nine-month period that we set for that," Kerry told reporters after separate talks with Palestinian and Israeli leaders. "We're not talking at this point about any shifts (in the schedule)," he said, dismissing bleak assessments from both sides on progress in the U.S.-brokered negotiations, which resumed in July after a three-year pause. The U.S. top diplomat wants the two camps to accept a so-called framework accord that will touch on all the main issues, such as security, the future of Jerusalem and the fate of refugees, and serve as a broad outline for the final deal. Palestinians fear such a preliminary agreement could serve to delay once again their hopes of establishing an independent state in the West Bank, Gaza Strip and East Jerusalem - land the Israelis seized in the 1967 war. Kerry said his talks over the past two days, played out against a backdrop of fierce winter snow storms, had focused on security, with retired U.S. General John Allen joining him for the discussions with Palestinian President Mahmoud Abbas.

Palestinian sources said Allen, a former commander of U.S. troops in Afghanistan, had drawn up plans to allow a continued Israeli military presence for the next 10 years in the Jordan Valley - along the eastern border of any new Palestinian state.

Israel says its troops have to remain there to prevent arms and militants from entering the West Bank and launching attacks. Abbas has rejected the idea, but said he would accept seeing U.S. troops deployed along the border.

"We are working on an approach that both guarantees Israel's security and fully respects Palestinian sovereignty," Kerry said, without giving further details.

Palestinian negotiator Saeb Erekat said after Kerry's visit "we want to achieve a peace based on Israel's withdrawal from lands occupied in 1967".

Palestinians also question whether Israel will press ahead with the third tranche of a planned release of Palestinian prisoners.

Seen as a vital confidence-building measure, Israel has so far freed about half the 104 prisoners it had pledged to let out of its jails under a deal secured by Washington in July. Kerry said the third tranche would go ahead on December 29.

Kerry has made nine visits to the region since taking office in February in a relentless campaign to gain momentum and bridge a vast gulf of mutual mistrust.

"We remain hopeful that we can achieve that final-status agreement. Why? Because we are absolutely confident ... that for both sides, and the region at large, peace can bring enormous benefits," Kerry said.

He left Israel later on Friday, bound for Vietnam and the Philippines.