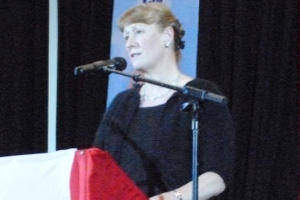 access to the Motability Car scheme are _“not fit for purpose”, _as

thousands of disabled people across the country – including in Enfield

North – have seen their cars taken away from them.

Speaking during a packed parliamentary debate on the issue, on Tuesday

Cathy Walsh, who suffers from the disability called severe generalised

dystonia. Ms Walsh has been on Disability Living Allowance for 23 years

and was recently asked to reapply for the new Personal Independence

Payment (PIP). On Friday 18th December 2015, she was notified that her

application for the advanced rate mobility component of PIP had been

scheme. Ms Walsh’s car, which had been invaluable in allowing her to

lead an independent life, was, therefore, taken from her at the

Challenging the Government on how Ms Walsh had been treated, Ms Ryan

stated that the representative from ATOS Healthcare conducting the PIP

assessment had, in reference to the case notes, taken _“longer to

write the report than it took to undertake the assessment”. _In

less.” _On those terms, Ms Walsh has always had a very strong medical

case to qualify for the higher-rate mobility allowance.__

extremely stressful route of a mandatory reconsideration and an appeal

to a tribunal,_ _which has only worsened her condition.” _

Given the evidence, and the other cases raised by MPs, Joan called for a

assessment process.”_ Significantly, after the debate - and in light

of the medical evidence provided by her consultant - Ms Walsh received

the higher rate mobility component of PIP. Ms Walsh will be eligible to

re-join the Motability Scheme, but it may be weeks before she has access

_“I am really pleased Cathy’s case has been looked at again, but she

should never have been put in this position._

this situation has caused her over the past two months._

_However, Cathy’s case is the tip of the iceberg. It is clear from the

1. The Hansard transcript of Joan’s speech can be found below and the

weblink to the debate in full can be found  here:

2. Severe generalised dystonia is a condition that results in

3. Motability is a registered charity set up by Royal Charter in 1977.

The charity oversees the operation of Motability Operations, a private

limited company which leases and sells motor vehicles and wheelchairs to

disabled people under a number of schemes.

4. Atos Healthcare is a private company which conducts assessments on

behalf of the DWP.

5. In a report on the issue of Motability from February 2016 the BBC

reported that _“nearly 14,000 disabled people who rely on a specialist

motoring allowance have had their cars taken away from them following

Kilmarnock and Loudoun (Alan Brown) on securing the debate. I am here

today to raise the issue of my constituent Cathy Walsh, though her case

is representative of many others. She suffers from severe generalised

dystonia, a condition that results in uncontrolled spasms, affecting her

limbs and speech. She has been disabled since birth and has tremendous

difficulty moving unaided. With a seriously disabling disability, she

has been on disability living allowance for 23 years. On Friday 18

December, Ms Walsh was notified that her application for the

advanced-rate mobility component of PIP had been turned down, and she

was distraught—her car, which had been invaluable in allowing her to

lead an independent life, would be taken from her. That life-changing

decision was based on one assessment conducted over an hour. It took the

reservations about the value of this assessment.”

I agree. Atos said that Ms Walsh was able to walk between 50 and 200

metres, but her consultant has “no idea how ATOS’ assessment could

have been made, it is clearly incorrect… At best she can walk up to 20

metres and on a bad day significantly less.”

On those terms, it is obvious that Ms Walsh has a very strong case to

qualify for the higher-rate mobility allowance. Instead, she has had to

go down the extremely stressful route of a mandatory reconsideration and

an appeal to a tribunal, which is making her condition worse. Her

independence has been severely curtailed, at least until the tribunal

decision is known, which could be months away.

Ms Walsh will have to rely on others even to help her cash the £2,000

transitional support cheque from Motability, as she cannot get to the

bank on her own. That raises another issue: why cannot this money be

transferred directly into her account? Even when the £2,000 has been

deposited, Ms Walsh will be in a state of financial limbo. If she wins

her appeal but decides to keep the money, she would not be able to

return to the Motability scheme for six months.

scheme as quickly as possible, which she is keen to do. She would then

principle. However, if the tribunal drags on for several months, Ms

Walsh will inevitably need to use some, if not all, of the transitional

payment to pay for other forms of assistance and transport. She would

first place. The Government say that what we have now is a “fairer

assessment process.” Well, it does not feel fair to Ms Walsh. She is

it is fair; and, more to the point, her consultant, who understands her

condition as well as anyone, thinks it is very unfair. If her treatment

with, the process has not been fair to them, either. The Government must

be willing to conduct a thorough review of the process, which is not fit

for purpose in its current state. I look forward to hearing how the

Minister intends to resolve these issues.