John Kerry said on Tuesday Israeli- Palestinian peace talks had run into difficulties but thought it still possible some agreement could be reached. 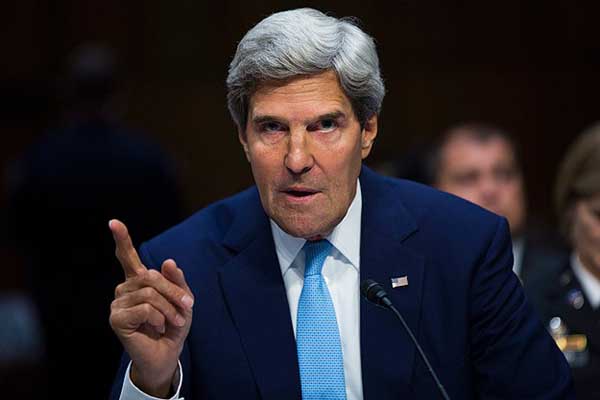 "I come here without any illusions about the difficulties, but I come here determined to work," Kerry said after arriving in occupied Palestinian territory ahead of talks on Wednesday with Prime Minister Benjamin Netanyahu and Palestinian Authority President Mahmoud Abbas.

Few details have emerged from negotiating sessions between the two sides held at unannounced times and at secret locations in line with pledges to keep a lid on leaks.

But both sides have been airing their frustration over a lack of progress on core issues such as the borders of a Palestinian state, security arrangements, the future of Israeli settlements in occupied territory and the fate of Palestinian refugees.

"The Palestinians are not conducting the talks in good faith," Gideon Saar, the Israeli interior minister told Army Radio. "(The Palestinians) are locked in their positions and are showing no flexibility on their starting positions."

Abbas, in a speech broadcast on Monday, said: "After all the rounds of negotiations there is nothing on the ground."

On the sidelines of the peace talks, Israel has released half of the 104 Palestinian prisoners it pledged to free under a deal Kerry brokered to draw Abbas back to negotiations after a three-year break over Israeli settlement-building.

Israel says continued construction in settlements, in areas it intends to keep in any peace accord, was part of those understandings, which led to the return home of long-serving Palestinian inmates convicted of killing Israelis.

In tandem with the release of 26 men last week, Israel pressed ahead with plans to build 3,500 more settler homes in the West Bank, a move widely seen as an attempt by Netanyahu to placate hardliners in his government.

"What's required is a firm American position on Israel's provocations. Israel is continuing its policy of putting obstacles in front of the peace process - every time Kerry comes to the region they announce more settlements."

"If they can't even ... stand beside and behind the agreements that we had, that we release prisoners but we continue building, then how can I see that they'll actually stand by the larger issues?" he said in an interview with the Israel-based i24 television news channel.

Abbas, speaking to his Fatah party on Sunday, voiced opposition to any such linkage, cautioning that "this equation could blow up the talks" and "there could be tensions soon".