Israel will not release Palestinians

Tzipi Livni said the Palestinians to be released would be chosen among "petty offenders". 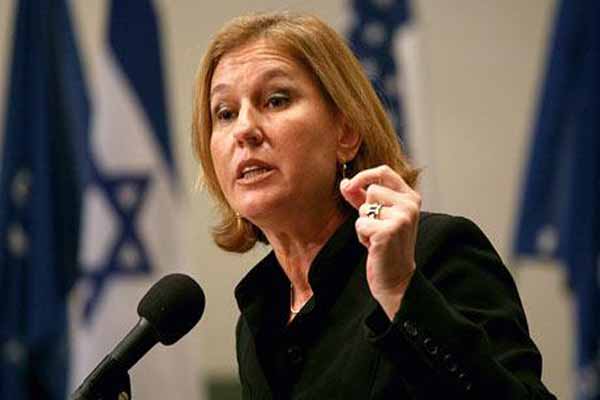 Israel's Justice Minister and chief negotiator Tzipi Livni said on Monday that Israel will not release Palestinian inmates who were involved in the killing of Jews.

"It is out of question that the Palestinian prisoners who killed Jewish citizens or were involved in the killings will be released," she told the Israeli Radio in response to media stories over the proposed release of 104 Palestinian prisoners in Israeli jails as part of the fresh peace talks between Palestine and Israel.

She said those Palestinians to be released from Israeli prisons would be picked from among "petty offenders".

Livni announced on Sunday that Israel will free next week the first of the four groups of long-held Palestinian prisoners as part of a deal to restart peace talks with Palestine.

Israel agreed in principle to release 104 veteran prisoners in a US-brokered agreement that cleared the way toward resuming the five-year-frozen peace talks with the Palestinians which began in Washington last week, and due to continue in Jerusalem in mid-August.

Israel is expected to release 26 Palestinian prisoners on August 13 to constitute the first of four stages of prisoner releases as a gesture for resuming direct Israeli-Palestinian peace talks, said Chief Palestinian negotiator Erekat on Saturday.

According to the data of the Palestinian Ministry of Detainees, there are 4,660 Palestinian prisoners in Israeli jails.