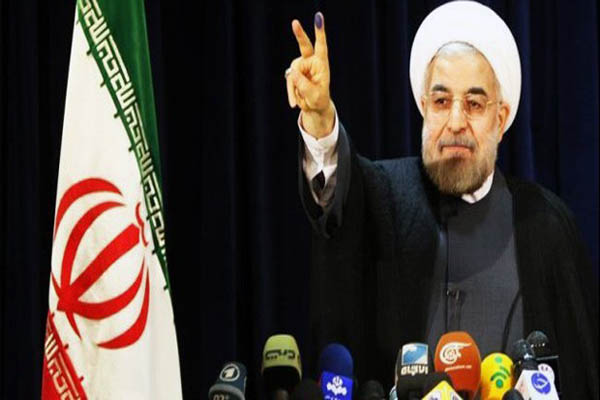 Hassan Rouhani took office as Iran's president on Saturday, succeeding Mahmoud Ahmadinejad, after Supreme Leader Ayatollah Ali Khamenei endorsed him, state TV said. Rouhani, a cleric who won an election in June, will take the oath of office in a ceremony in Iran's parliament on Sunday. Iran's Supreme Leader Ayatollah Ali Khamenei endorsed Hasan Rouhani's presidency during tanfiz (validity) ceremony. The Tanfiz ceremony was held in Iran's supreme leader's office and Khamenei formally granted the Rouhani his authority. According the report, Supreme Leader and his chief of staff, the heads of the judiciary and Expediency Council, current cabinet members, senior military commanders, and members of parliament attended in this ceremony. According to the article 110 of the Iranian constitution, the decree on Iranian president's coming to power will be signed by Supreme Leader. Hasan Rouhani will announce his four-year term presidency plans during this ceremony.

The swearing-in ceremony of Rouhani also will be held tomorrow.

Before, a member of parliament Seyed Mohammad Yasrebi said on Sunday that at least ten foreign presidents will take part in the swearing-in ceremony of Iran's president-elect Hassan Rowani.

"Pakistan, Afghanistan, Armenia, Lebanon, Kazakhstan, North Korea, Turkmenistan, Guinea-Bissau, Togo, and Tajikistan are the ten countries that their presidents will take part in the event," the Fars News Agency quoted Yasrebi as saying.

"The list of the guest will be finalized by Thursday," he said.

The reformist candidate, Hassan Rowani, was elected as Iran's next president with 50.7 percent of votes. Tehran Mayor Mohammad Bagher Ghalibaf finished second with 16.56% of the vote. Nearly 36.7 million Iranians voted, 72.7% of eligible voters.