M25 is to be carried out by the government following calls from an Enfield MP. 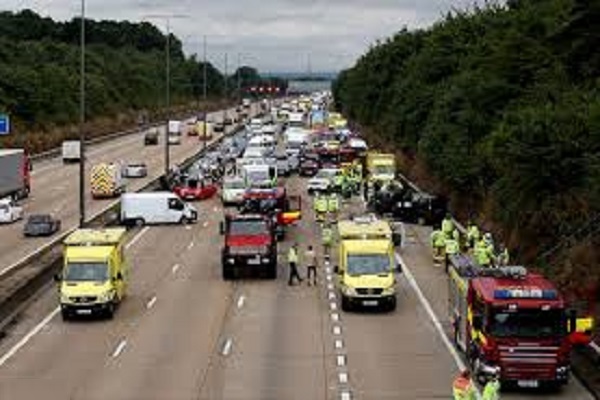 An inquiry into whether roadworks have contributed to a "spike in fatal accidents" on the M25 is to be carried out by the government following calls from an Enfield MP.

Two weeks ago a lorry driver was killed when his vehicle overturned and caught fire near junction 25. Last week four men were injured after a lorry overturned across a central reservation.

Enfield North MP Nick de Bois, whose constituency is bordered by the junctions concerned, spoke in the House of Commons last week to call for an inquiry.

Transport Secretary Patrick McLoughlin told the House of Commons he would look to have a full investigation.

The roadworks, which began in February, are scheduled for completion in December 2014, and include the installation of a stronger concrete barrier, strengthening bridges as well as resurfacing the roads.

Mr de Bois told Mr McLoughlin there had been a "serious spike in fatal accidents" on that part of the motorway and called for the causes, which may include the road management during the works, to be "urgently" investigated.

Mr McLoughlin said the "appalling incidents" had obviously caused great distress to the families of the victims but also "incredible disruption" to the area. He said, "I will want to have a full investigation as to whether the points that you have raised have any bearings on these particular accidents," he said.

Mr de Bois told the Avrupa Gazete, “It’s clear from discussing this with hauliers and regular users that many are concerns that the lanes are too narrow and the lighting is inadequate. No-one wants to see more loss of life so I’m pleased the Secretary of State is treating this matter with the urgency it requires”.