Golden Dawn lawmaker Panagiotis Iliopoulos to leave the chamber because he had called other deputies "worthless" and "cattle". 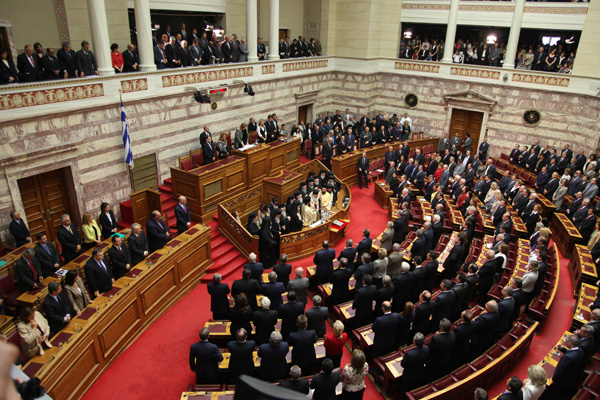 Greece's parliament evicted a far-right lawmaker for insulting rivals in a tumultuous debate on Friday that prompted jeers of "Heil Hitler" from a leftist deputy and bolstered calls to crack down on the nationalist Golden Dawn party. Tapping into resentment over budget cuts and illegal immigration in the crisis-hit country, Golden Dawn has emerged from obscurity to become Greece's third-biggest party, polling nearly 12 percent. Greece's conservative-led government is drafting anti-racism legislation in an effort to rein in the party which it says abuses parliamentary immunity to incite racial hatred with anti-immigrant speeches. The parliament speaker ordered Golden Dawn lawmaker Panagiotis Iliopoulos to leave the chamber because he had called other deputies "worthless" and "cattle".

"We're not obliged to listen to their hate speeches," said Speaker Yannis Dragasakis.

"You will not beat nationalism with any legislation," Iliopoulos said, as he left the chamber to jeers of "Heil Hitler" from a lawmaker belonging to the leftist Syriza party.

It was the first time in more than 20 years that a member has been evicted from parliament.

Golden Dawn, which organises "Greeks-only" food handouts and blood donations, denies the neo-Nazi label though its emblem resembles the Swastika and there are published photographs of its supporters giving Nazi-style salutes.

The party denies any involvement in a recent wave of attacks on immigrants that activist groups have blamed on Golden Dawn sympathizers.