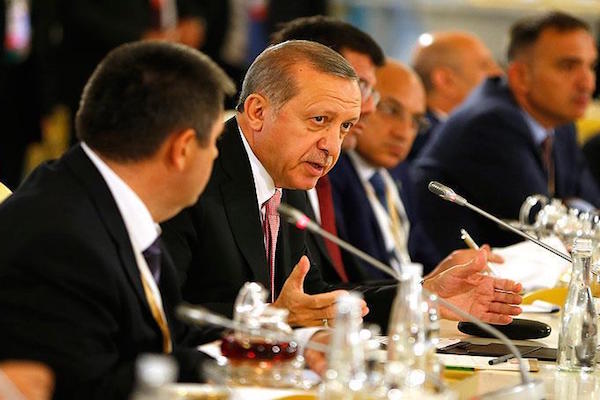 ST. PETERSBURG-Having met Russian President Vladimir Putin and Turkish and Russian businessmen and women in the Russian city of Saint Petersburg late Tuesday, Erdogan said, "Today it is well understood that the Fetullah Terror Organization and the powers behind it intended to deteriorate the relations between the countries"

Relations between the two countries had remained soured until the issue seemed largely resolved June 29 through a letter and subsequent telephone calls between the countries’ leaders.

Putin gave his support to Turkey regarding the July 15 coup attempt and said he stood by the elected government, offering his condolences to the victims of the attempt.

On July 22, Russia also lifted restrictions on flights to Turkey, which had been implemented temporarily following the coup attempt, after Turkish officials assured their Russian counterparts that additional security measures were being taken.

Erdogan said the shot down of the plane on Nov. 24, 2015 cast a dark shadow on the fruitful relations with Russia.

Ankara has repeatedly said the coup attempt was organized by followers of U.S.-based preacher Fetullah Gulen and FETO.

Turkey has since requested Gulen’s extradition, however, the U.S. says it is reviewing the request's formality. The issue has been a dispute between Turkey and U.S.

Gulen is also accused of leading a long-running campaign to overthrow the state through the infiltration of state institutions, particularly the military, police and judiciary, forming what is commonly known as the parallel state.