EU Parliament to vote for head of European Commission

If elected, Ursula von der Leyen will be first woman to serve as president of European Commission 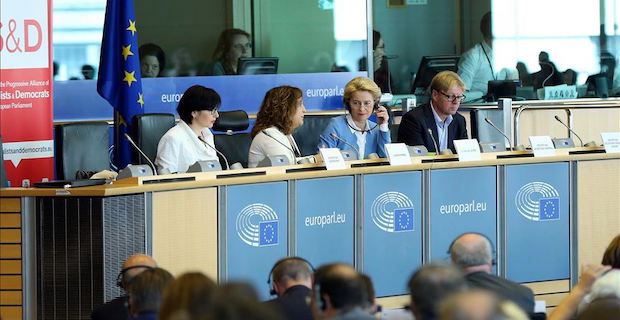 The European Parliament will vote on Tuesday for German Defense Minister Ursula von der Leyen, the candidate for the top job of the European Commission. If elected, von der Leyen will be the first woman to serve as the president of the Commission.

To become the president, she must secure the support of an absolute majority of the Members in the European Parliament (at least 374 votes). The vote will be a secret paper ballot.

If von der Leyen fails to win a majority, the European Council will come up with a new candidate in one month.

"Almost 40 years ago to the day, #SimoneVeil became the first female President of the @Europarl_EN. If Europe were a woman, then Europe would be Simone Veil. What can we do today to ensure that we can live out her vision of a united & peaceful Europe in the future? #EuropeIsAWoman," she tweeted on Tuesday.

Keywords:
EU ParliamentEuropean Commission
Your comment has been forwarded to the administrator for approval.×
Warning! Will constitute a criminal offense, illegal, threatening, offensive, insulting and swearing, derogatory, defamatory, vulgar, pornographic, indecent, personality rights, damaging or similar nature in the nature of all kinds of financial content, legal, criminal and administrative responsibility for the content of the sender member / members are belong.
Related News