Erdoğan stated that they took off their National View's hats

Sener, 'I was one of the leading members in the establishment process of the AK Party. I can frankly say that I was the one who prepared the party programme of the AK Party' 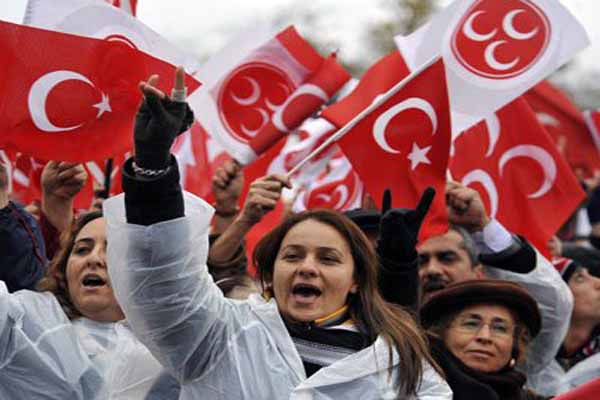 Interview with Abdüllatif Şener (Part I): “Turkish Politics since the 1990s: Hopes, Resentments and Current Challenges” As Centre for Policy and Research on Turkey (ResearchTurkey), we held an interview with Associate Professor Abdüllatif Şener, who served as Turkish Minister of Finance at RefahYol coalition government (The coalition government established by the Welfare Party and True Path Party) between 1996 and 1997, and as the Minister of State and Deputy Prime Minister at AK Party government (Justice and Development Party) as well as AK Party deputy between 2002 and 2007. As a publicly and very well-known political actor, Mr. Şener was also one of the founding members of the AK Party. Besides his political experiences, we have talked about a wide range of issues which are high on the agenda including: the democratic record of the AK Party government, its Syrian policy, the Kurdish opening, the Presidency system, and finally the Gezi protests in Istanbul. The interview with Mr. Abdüllatif Şener, which we think carries an immense importance for the audience of the ResearchTurkey, will be published in two parts. In the first part of the interview the main focus will be on the establishment phase of the AK Party; the party’s position vis-à-vis the National View Movement, political election processes, and the government, media, capital groups and civil society relationships in Turkey where we had chance to hear the personal views of Mr. Abdüllatif Şener based on his experiences as an insider.

Synopsis of the Interview:

“I was one of the leading members in the establishment process of the AK Party. I can frankly say that I was the one who prepared the party programme of the AK Party”

“The Prime Minister is not a person that internalized the idea of democracy… He thinks that since he won the elections he can do whatever he wants.  I do not think that he knows what a state of law means as well; none of his acts are compatible with the principle of state of law”

“In comparison to the Erbakan Hodja’s world view and philosophical framework, I can claim that Mr. Erdoğan is much more an ‘Easterner’ than Erbakan Hodja”

“The National View addresses the common thoughts and expectations of these people. Erbakan Hodja was the one who theorized the idea of National View. I never said I took off my National View’s hat”

“Erdoğan stated that they took off their National View’s hats, now National View meetings against the protests are being arranged in 81 provinces of Turkey. There is an incoherency here”

“I am not against privatization. But I was against when there were lawless actions”

“The privatisation decision that has to be signed by the bureaucrats, and the minister responsible for privatization (Minister of Finance at that time) first came to me, when I was Deputy Prime Minister, and a member of Privatization High Council. Whereas it should be signed by the Prime Minister (PM) last, and by me just before the PM, it came to me for second signature as signed by the PM first. However, even the minister who brought me the decision did not sign the decision. I thought that the meaning of this decision was ‘Either we remove you from this office or we will bring you down a peg or two’. I told that ‘if you could remove me from this office take me then but I will not allow you to cause trouble for me’

“I was a publicly known name on behalf of the party. It would harm his interests and relations between his base in the party if he left me out of the Council of Ministers”

“The Prime Minister was estranged from me for two months. But he used to authorize me for the prime ministry when he was abroad because he did not want the public to learn that he was offended”

“Prime Minister Erdoğan requested letter of resignations from the ministers before their appointments. Three ministers were removed then: Sami Güçlü, Güldal Akşit and Zeki Ergezen”

“The Prime Minister and Abdullah Gül tried to convince me to be candidate at prime minister’s residence after midnight. You know that in order to be a candidate, you have to pay 2000 TL, and Gül paid this money for me. Nevertheless, I stated that I wouldn’t be a candidate”

“After I left the AK Party I returned to university and I was happy. I did not think to turn back the politics immediately”

“On May 25, 2009, we established the party. However, in a month the companies of Aydın Doğan, who is one of the biggest media bosses of the country, had undergone a tax audit and he was made to pay taxes and penalties equal to as much as his entire wealth. This sanction served as a message to the other media groups.”

“I worked as tax inspector in Turkey so I know it very well. You can deduct the tax and you can apply the penalty whenever you want in Turkey. This is really one of the most serious weaknesses of the state of law in Turkey”

“We closed the Turkey Party. We did not receive any support from the media. There were 15 thousand people in our first meeting in Samsun. There was no news about the meeting”

“Freedom of media is not a concept that the Prime Minister has in mind. The press will be under his disposal; the NGOs also will take directions from him. The separation of power does not exist in his worldview. Legislation, executive and judiciary should be monopolised by him”

“When the Prime Minister is screaming at the protesters in İstanbul, the administrative chiefs perceive it as a command. That is why they are so harsh in their reactions”

“In the first 6-7 years, I had been the deputy who gave the toughest speeches at the parliament. I also harshly criticized the government from the lectern of the parliament”

“I can harshly criticize a party leader or the policies of a party but I have never individualized it. I have nothing to do with anyone’s personality”

Full Text of the Interview please follow the link; http://researchturkey.org/wp/wordpress/?p=3924