Meetings conducted in a positive spirit, participants agreed not to disclose details about their discussions, UN says 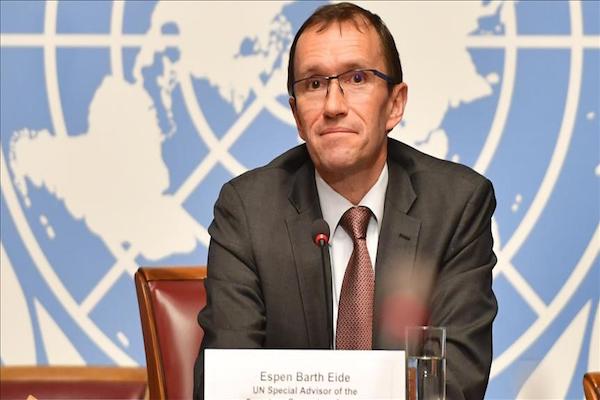 The second session of the international UN-brokered talks on the reunification of long-divided Cyprus with the focus on security and guarantees "successfully completed" in Mont Pelerin, Switzerland, the UN said on Thursday.

The Conference on Cyprus held its second session on Jan. 18-19 at the level of deputies and experts with participation of guarantor powers; Turkey, Greece, UK along with Turkish and Greek Cypriots.

"The working group, established during the high-level meeting in Geneva on 12 January, successfully completed the mandate entrusted to it by the Conference, namely identifying specific questions related to the issue of security and guarantees and the instruments needed to address them," the UN Special Advisor to the Secretary-General on Cyprus, Espen Barth Eide said in a statement on Thursday.

"The meetings were conducted in a positive spirit. The participants agreed not to disclose details about their discussions, as the proceedings of the conference have not yet concluded," Eide said.

Turkish Cypriot President Mustafa Akinci last Friday said the map submitted by Greek Cypriots to the UN was unacceptable and the Turkish Cypriots would not sign anything that would not include rotating presidency.

Speaking at the UN Office in Geneva after last Thursday's Cyprus conference, Akinci told reporters that the Turkish Cypriots have been willing to see the continuation of security and guarantees provided by Turkey.

Turkish and Greek Cypriots exchanged maps on proposed territorial boundaries on Jan. 11 and the documents have been sealed in a UN vault.

"The map submitted by the Greek Cypriots to UN is unacceptable," Akinci underlined.

Turkey’s Foreign Minister Mevlut Cavusoglu said last Thursday that Cyprus reunification talks would continue with technical discussions with a working group at the deputy level Jan.18, followed by ministers and then a prime ministerial level meeting.

"There is no consensus among sides on when to hold the next Cyprus conference at the ministerial level," Cavusoglu told reporters after an international conference on Cyprus in Geneva on Jan. 12.

Reunification talks resumed last May and both sides have repeatedly expressed optimism a solution could be found.

Once a final agreement is reached, it would be put to both Cypriot communities in a referendum.

Akinci has said a reunification vote could be held in mid-2017 pending agreement in Geneva.