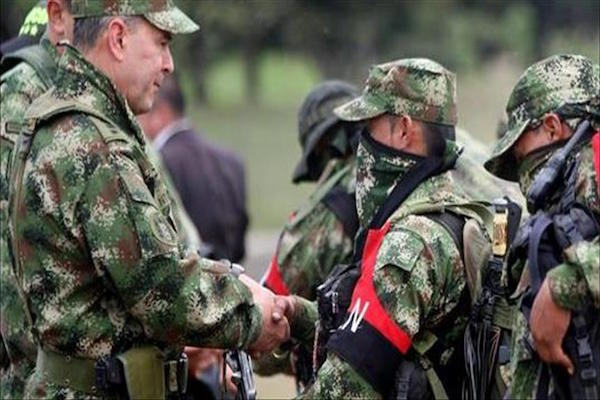 BOGOTA, Colombia-The leader of the FARC guerrillas on Sunday called a definitive cease-fire with the Colombian government that essentially brings an end to more than 50 years of armed conflict in the South American nation.

“In my condition as the commander-in-chief of the FARC, I order all of our officers, all of our units, to all and each and every one of our combatants, to halt military actions and hostilities against the Colombian State, in a definitive manner from 2400 hours tonight,” Rodrigo Londoño Echeverri, alias Timochenko, said during a news conference in Havana.

The announcement follows a declaration by Colombian President Juan Manuel Santos who said Friday his forces would on Monday begin a definitive cease-fire with the Revolutionary Armed Forces of Colombia (FARC).

“Our commitments are to bring to an end the armed struggle, transform ourselves in to a totally legal political movement, reincorporate ourselves into civilian life under the conditions agreed and to do whatever is within our ability so that the victims of this painful conflict receive justice and reparation,” Timochenko said. “And we are going to rigorously fulfil our commitments,” he added.

Peace talks that began in October 2012 addressed the issues of agrarian reform, political participation, illicit drugs, victims of the armed conflict and transitional justice and how to end the conflict. The agreement was reached Aug. 24 after almost four years of negotiating.

Timochenko said it is “fortunate” FARC could now quiet its guns. “We never lost hope that this fortunate day would come for our country and the population,” he said.