David Cameron on Friday arrived in the Black Sea resort of Sochi for talks on Syria with Russian President Vladimir Putin amid a new international push to find a way to end the two-year civil war. 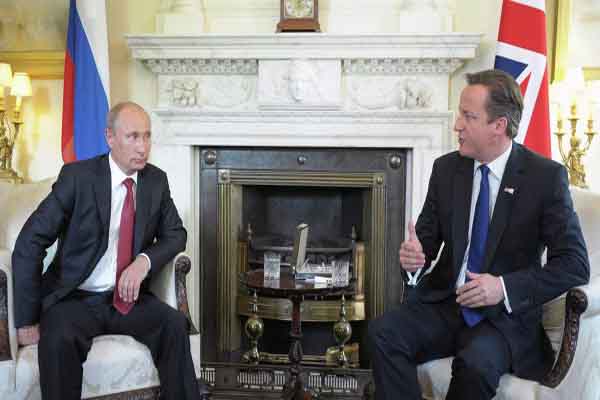 "The Syrian problem will be discussed," Putin's spokesman Dmitry Peskov told AFP, adding bilateral issues would also be on the agenda. Cameron flew to Putin's palm-dotted residence on the Black Sea before the British premier's planned meeting with US President Barack Obama at the White House on Monday. "There's an urgent need to start a proper negotiation to force a political transition and to bring this conflict to an end," Cameron told the House of Commons on Wednesday. The war has cost an estimated 70,000 lives and displaced millions of people, including hundreds of thousands who have fled to neighbouring countries. "There is a growing body of limited but persuasive information showing that the regime has used and continues to use chemical weapons including sarin, and the room for doubt about this continues to diminish," Cameron said. His high-profile visit is part of frantic diplomatic efforts to bring the warring sides in Syria to the negotiating table amid claims of the use of chemical weapons and increasing fears that the conflict would spill over Syria's borders.

The talks with Putin come amid concerns that Russia may be preparing to sell Syria sophisticated surface-to-air missiles which will significantly strengthen its defences and complicate any foreign intervention.

US Secretary of State John Kerry warned that any such sale would be "potentially destabilising" for the region.

Earlier this week, Russia and the United States offered to hold an international conference in search of peace in Syria.

"A focus was placed on the need to stop the bloodshed and to start talks between the government and all opposition groups as soon as possible," the Russian foreign ministry said, referring to Lavrov's meeting with his Jordanian counterpart.

Syria expert Boris Dolgov expressed doubt that the talks in Sochi would lead to any major breakthrough.

"Cameron's visit is aimed at building on Kerry's efforts," said Dolgov, a Syria scholar at the Centre for Arabic and Islamic Studies at the Russian Academy of Sciences' Institute of Oriental Studies.

He expressed doubt that the West would be able to see a shift in the position of Russia which has throughout the conflict supported the regime of Syrian leader Bashar al-Assad.

Russia argues that Assad should be part of any negotiations on the future of Syria, while the West wants Assad out.

Dolgov, who has visited Syria twice since the start of the conflict, said, citing his institute's data, that between 60 percent to 75 percent of Syrians still supported Assad.

"It's nonsense to say it is possible to create a coalition government without Assad." The peace conference proposed by Lavrov and Kerry will aim to build on the unimplemented Geneva accord agreed by world powers last June. The deal set out a path toward a transitional government without spelling out what Assad's fate should be.

Cameron's trip to Putin's Sochi residence, which is usually reserved for meetings with close allies and friends, is highly unusual. It comes despite years of tensions following the polonium poisoning of Kremlin critic Alexander Litvinenko in London in 2006.

Cameron visited Moscow for talks with Putin's younger predecessor Dmitry Medvedev in 2011 in an effort to put his country's rocky relations with Russia on a more pragmatic footing but ties remain strained.

The trip to Sochi, which will host the Winter Olympics next year, had been planned for several weeks but had been subject to a media blackout.

The Philippines said Friday it may quickly withdraw from a United Nations peacekeeping force in the Golan Heights because of security concerns, after Syrian rebels abducted four Filipino troops.

Syria has long sought to recover the Golan Heights, which Israel captured in the 1967 war.

Syria threatened on Thursday an immediate response to any new Israeli strike, after two reported attacks on military targets, as its Lebanese ally Hezbollah said Damascus would arm it with 'game-changing' weapons despite those strikes