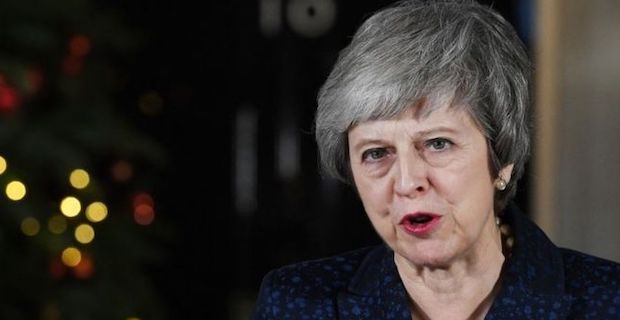 The prime minister is seeking legally binding pledges from EU leaders on the "backstop" - the plan to avoid a return to a manned Northern Ireland border.

Critics say the plan will keep the UK tied to EU rules indefinitely and curb its ability to strike trade deals.

The EU says it will not renegotiate the backstop but may agree to greater assurances on its temporary nature.

It seems unlikely that would win over enough support for her Brexit plan to have a realistic chance of getting through the House of Commons, with tensions heightened in the Conservative Party in the wake of Wednesday evening's vote.

Theresa May did win the ballot of Conservative MPs, on whether she should remain their party leader, by 200 votes to 117. But in a last-minute pre-vote move, she offered a promise to her MPs that she would step down before the next election.

BBC political editor Laura Kuenssberg said that sort of move tends to lead to power "draining away", adding that the party's "rival tribes might be now set on a course to pull her - and themselves - apart" with the expectation that at "some point she will have to change tack on Brexit".

Mrs May is currently meeting Irish Prime Minister Leo Varadkar ahead of the summit.

Speaking in Downing Street after the vote, Mrs May vowed to deliver the Brexit "people voted for" but said she had heard the concerns of MPs who voted against her.

But Liberal Democrat leader Sir Vince Cable said, despite the "high drama" of Wednesday, "nothing has really changed".

Former Tory leader Iain Duncan Smith said it was now up to Mrs May to listen to her party and "push the EU... to resolve the backstop".

What will happen at the EU summit?

But a trip to meet the Irish Taoiseach Leo Varadkar had to be cancelled because of the leadership vote.

At Thursday's summit, Mrs May will have an opportunity to spell out face-to-face the problems to leaders of all the other 27 member states.

The EU leaders will then consider what could be done - without Mrs May in the room.

Theresa May will front up in Brussels later - still the prime minister, still officially in charge.

One cabinet minister last night told me the whole challenge to her had been "futile", suggesting it hadn't really changed much.

But it really has. Theresa May has a temporary shield from another direct call for her departure from her own MPs . Angry Brexiteers can't try to move her out for another year in the same way.

That on its own is a sigh of relief certainly for her supporters, claiming a "good result" last night.

But that does not remotely protect her from the brutal reality that she, right now, has no workable Brexit policy that can make it through the Commons.

The BBC understands that any reassurances offered to Mrs May could centre on an attempt to "detoxify" the idea of the backstop for Westminster, says the BBC's Europe correspondent Kevin Connolly.

He said its temporary nature could be emphasised, along with the EU's readiness to keep searching for a better alternative even if the backstop were ever to be triggered - both stronger reassurances to the policy's critics than offered in the past.

For example, a draft of the European Council conclusions on Brexit says the EU would use its "best endeavours to negotiate and conclude expeditiously a subsequent agreement that would replace the backstop so that it would only be in place for a short period and only as long as strictly necessary".

But the BBC's Brussels reporter Adam Fleming says the draft put forward by the European Council could be subject to change.

Westminster critics of Mrs May's Brexit deal might also complain that it is not legally binding.

However, the core message from Brussels remains that there will not be a renegotiation of the withdrawal agreement whatever happens, even if the Conservative Party had changed its leader.

This was reiterated by the President of the European Commission Jean Claude Juncker who, in a phone call with Mr Varadkar on Wednesday, said that the deal on the table was "a balanced compromise and the best outcome available", and "cannot be reopened or contradicted".

What is being said in Westminster?

Mr Duncan Smith, a Brexiteer who voted against Mrs May in Wednesday's vote, said he wanted to "send a strong message" to the PM.

He told BBC Radio 4's Today programme: "We cannot go on just with the idea that a fiddle here and a fiddle there is what the problem is."

Instead, he said Mrs May should say that the £39bn the UK has agreed to pay the EU as part of the divorce deal is "at risk".

"They have got to say to the EU... we are not committed to this £39bn unless we get some resolution".

Sir Vince Cable, who is against Brexit happening, told BBC Breakfast: "We are still back with the problem that the government has a proposal that we can't get through Parliament and we have got to try and break that gridlock."

He called on Labour leader Jeremy Corbyn to "come off the fence" and back another public vote on Brexit.

Mr Corbyn last night agreed that nothing had changed and that the government was in "chaos".

Labour has said that it will table a no-confidence motion in Theresa May's government that all MPs - not just Conservatives - will be able to vote in - but only when they felt they had a chance of winning it, and forcing a general election.

But the DUP - which props up Mrs May's government - said it would not support such a motion at this stage.

Shadow Chancellor John McDonnell urged Theresa May to work with Labour on getting a deal with the EU that "will protect jobs and the economy".

He said there was an "overwhelming majority" in the Commons against a no-deal Brexit but the prime minister should now hold a series of votes to establish what other options MPs were willing to accept.

What happened at the confidence vote?

The prime minister won the confidence vote with a majority of 83 - 63% of Conservative MPs backing her and 37% voting against her.

Her supporters urged the party to move on but critics said losing the support of a third of MPs was "devastating".

The BBC's Laura Kuenssberg said the level of opposition was "not at all comfortable" for the prime minister and a "real blow" to her authority.

Keywords:
BrexitEU SummitTheresa May
Your comment has been forwarded to the administrator for approval.×
Warning! Will constitute a criminal offense, illegal, threatening, offensive, insulting and swearing, derogatory, defamatory, vulgar, pornographic, indecent, personality rights, damaging or similar nature in the nature of all kinds of financial content, legal, criminal and administrative responsibility for the content of the sender member / members are belong.
Related News