The U.K.'s potential exit from the EU poses greatly imperil global economic growth, the head of the IMF said 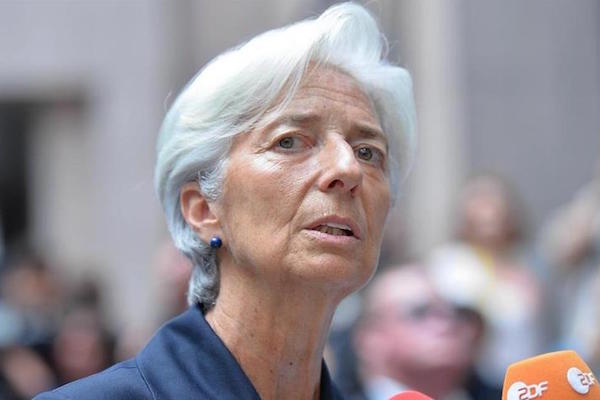 NEW YORK(AVRUPA TIMES)-The U.K.'s potential exit from the EU poses greatly imperil global economic growth, the head of the IMF said Thursday. "We have elevated Brexit as one of the serious downside risks on the global growth. The risk of exit of the U.K. is a serious concern," Chief Christine Lagarde said during the annual spring meetings of the World Bank and IMF.

"It's been a long marriage between the members of the EU, and I hope it does not break. Like all marriages, good talks can actually help. I hope that the dialogue can continue," she added.

The IMF is preparing a report about the U.K. to be published in May, where it will include a comprehensive chapter about the consequences of a Brexit, she said.

In addition to the potential risks of a British exit, Lagarde also dodged claims that the global economy is under a crisis. "We are on alert, not alarm,” she said.

“We believe that global economy can actually repair," she added, but said the global economic recovery has been "too slow and too fragile."

The IMF expects global growth to be 3.2 percent this year and 3.5 percent next year.

"This makes it harder to spread warmth to the citizens of the globe ... emerging and developing countries need to watch declining commodity prices, high corporate debt, and volatile capital flows ... and our concern is also the risk of spillovers, from advanced economies and emerging markets to the rest of the world," she said.

World Bank Group President Jim Yong Kim said besides the U.S. and India, growth remains weak in Europe, Japan and emerging economies, while Russia and Brazil are again expected to have negative growth.

"The weakening global economy threatens our progress toward ending extreme poverty by 2030," he said, adding that the Group is working on to fund projects to create thousands of jobs for Syrian refugees, make renewable energy cheaper and providing more than $25 billion in loans to middle income countries in 2016.

Stressing that the refugee problem has increased tremendously in the world, he said the overall amount provided for the issue is "well north of $20 billion a year."

The Group's chief also underlined that worldwide tax evasion would have a negative impact to end poverty around the globe.

"Leaders in developing countries are telling us that they want to work with us very strongly to track down these illicit financial flows to make sure that the fair share of taxes are being paid so that many of these assets that are taken out literally of the hands of governments and the poor can be then reutilized for tackling poverty and inequality," he said.

Kim emphasized that the IMF and the World Bank are ready to create efficient, transparent tax systems in many developing countries.