Bashar al-Assad on Wednesday received Russian and US delegations. 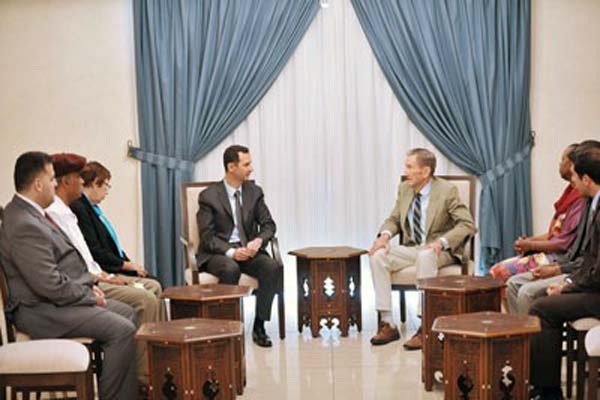 Syrian President Bashar al-Assad on Wednesday received Russian Deputy Foreign Minister Sergei Ryabkov and the accompanying delegation, discussing with them developments in Syria, reported the SANA. During the meeting, Assad voiced appreciation on behalf of himself and the Syrian people for Russia's stances in support of Syria in the face of the vicious attack and takfiri terrorism which is backed by Western, regional and Arab forces, saying that these stances raise hope of drawing a new map for global balance. For his part, Ryabkov affirmed the firmness of the Russian position on the crisis in Syria based on the need to find a political solution and adhering to international laws that reject the use of force and respect people's right to create their own future. Ryabkov noted that the Syrian issue has become a priority for Russia and a pivot of world politics, affirming the need to continue deep and practical consultation and coordination between the two countries' leaderships.

During the meeting, Assad said that the policies adopted by the US administration in the region, which are based on waging wars, interfering in countries affairs, and imposing dominance on its people and resources, do not serve the interests of the American people and contradict their values and principles.

For their part, members of the delegation hoped that peace and stability will return to Syria, saying that they will continue to defend Syria in various circles and work to uncover the false nature of the accusations promoted by Obama's administration to the American Public opinion to justify aggression on the Syrian people.