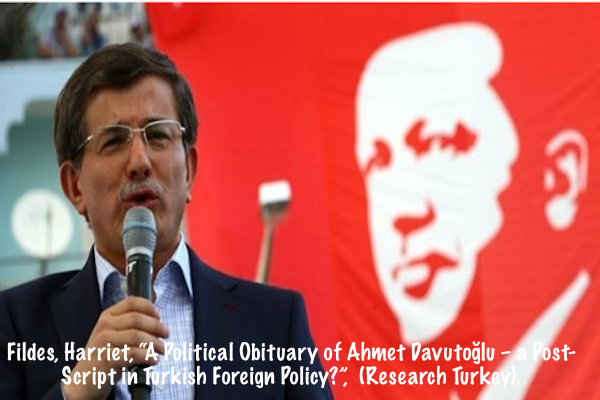 AVRUPA/LONDON- Research Turkey* Author: Harriet Fildes Date: May 18, 2016   Independent Turkey, New, Op-Ed Articles. With the news that the Executive Council had curbed the Turkish Prime Minister Ahmet Davutoğlu’s power to elect district officials, the end was clearly nigh: no longer a matter of if, now just a matter of when. And yet Davutoğlu’s political demise as PM will surely pale in the history books when compared with the ruins of his foreign policy vision, which ensured his downfall as much if not more so than Erdoğan’s palace coup.

Following the now infamous Pelican Brief, Davutoğlu is out and Erdoğan’s more pliable son-in-law is likely in. If not him, then another one of a handful of obedient Erdoğan yes-men. But Davutoğlu’s short-lived and overshadowed tenure as prime minister is not what the man will be known for; rather it is his time as foreign policy advisor and later foreign minister which will continue to attract analysts for years to come.

Academic discussions of Turkey as a regional hegemon: a humanitarian diplomat and legitimate mediator/ peace-keeper in the Middle East have dominated foreign policy analysis since the AKP first came into power, precisely as Davutoğlu intended – ever the rhetorician.  And although the debates rather than the practice may be his greatest accomplishment (some would argue only), it is that which ended his reign long before Erdoğan turned on him: breaking his vision and emptying out his promises.

During the loftier days of New Turkey  – when the Justice and Development Party (AKP) were still lauded across the western world as the only Muslim democrats, served up to the Middle East as the ubiquitous Turkish model – Davutoğlu was widely agreed to have revolutionised Turkish foreign policy. But did he? A brief survey of the comings and goings of Turkey’s relations with Europe and the Middle East tells us the answer is likely no.

Davutoğlu was an academic by trade and, despite the rising paradigm of him as a strong-man ready to rival Erdoğan, was an academic by nature.  Yet he was Turkey’s foreign policy architect and had historical vision if nothing else. In particular he was attuned to Turkey’s historical memory, mobilising publicly pervasive nationalist (and many would argue, neo-Ottoman) sentiments of Turkey as a ‘central-country’, put forth in his seminal doctrine Strategic Depth, to set a new global stage with Turkey at the epicentre.

Davutoğlu’s writings and theorising provided the fundamental intellectual and strategic framework for developments in foreign policy, both the self-styled re-orientation towards the Middle East and the new actors involved (including less desirable ones such as Hamas).

A Legacy in Tatters?

And so new stage was set. Hard power eclipsed soft. Davutoğlu’s brief time as PM saw him battling various regional conflicts often caused or exacerbated by an uncontrollable president, not least of which against Russia, the Kurds and Syria.

Turkey was being used by radical groups (including, some would say, elements within the government) as a thoroughfare for arms smuggling, people smuggling, oil smuggling and just about everything else. And Davutoğlu as the new PM was struggling to foster any level of security in his own country, much less help Turkey to resume its oft-touted leadership position as mediator and leader in the Middle East – a job profile Davutoğlu had strived to create.

These challenges led to the rise of Turkey’s shadowy security agency MIT, and it’s equally shadowy leader Hakan Fidan, to the fore of foreign relations – with Fidan emerging as Erdoğan’s new right-hand man and Davutoğlu promoted to puppet prime minister, and then to no minister at all.

His political philosophy of Turkey as an emerging civilisational leader with historical and cultural kinship ties and a responsibility to shape the world around is the legacy that will endure.

No longer the isolationist state it was under successive Kemalist regimes, it is this shift which sets Turkish foreign policy apart during the Davutoğlu era. It is also this shift that will continue to lead Turkey down the ever spiralling rabbit hole of Middle Eastern conflicts for better (using soft power tools) or, more likely, given the reversion to hard power and Davutoğlu’s unceremonious demise, for worse.