The UK's biggest retailer said its branch in High Holborn had been converted to allow customers to shop and pay without scanning a product or using a checkout. 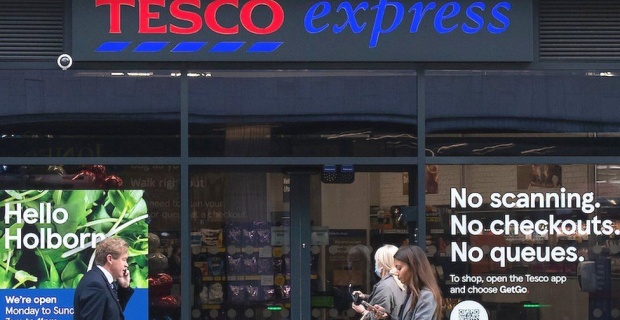 Tesco is opening its first checkout-free store in central London later on Tuesday.The UK's biggest retailer said its branch in High Holborn had been converted to allow customers to shop and pay without scanning a product or using a checkout.The new format, known as GetGo, follows similar stores opened by Amazon.Customers with the Tesco.com app will be able to pick up the groceries they need and walk straight out again.Tesco said "a combination of cameras and weight sensors" would establish what customers had picked up and charge them for products directly through the app when they left the shop.The technology is provided by Israeli tech start-up Trigo, which has similar partnerships with supermarkets in Germany and the Netherlands.

Previously, some of Tesco's staff have been able to use the system in the store at its headquarters in Welwyn Garden City, but this is the first time it has been available to regular customers.

Kevin Tindall, managing director of Tesco Convenience, said: "Our latest innovation offers a seamless checkout for customers on the go, helping them to save a bit more time.
"This is currently just a one-store trial, but we're looking forward to seeing how our customers respond."Tesco handout photo of a customer using the Tesco app in GetGo store in Holborn, London.Richard Lim, chief executive of retail analyst group Retail Economics, said Tesco's move was "reflective of the way the wider industry is heading".

Amazon Fresh now has three "just walk out" stores in London, having initially rolled out the technology in 2018 in the US city of Seattle, for example.

"One critical element of this for Tesco is also about gaining data and trying to elevate their proposition as much as they can for their customers," Mr Lim added.The firm's Clubcard programme already has 6.6 million users on its app, so the retailer is "well ahead of the curve" when it comes to using information on what a customer buys, or how they shop, to personalise their experience, Mr Lim says.

The supermarket has also benefited from a swing to online shopping during the pandemic.

According to its most recent set of results, Tesco's group revenues jumped by 5.9% to £30.4bn for the six months to August compared with the same period last year.
Operating profits, however, also increased by 28% to £1.3bn for the period due to several reasons including Covid-related costs, staff absences and investment needed to cope with increased online sales.

Keywords:
Central LondonCheckoutfree Store ICheckoutfreeTesco
Your comment has been forwarded to the administrator for approval.×
Warning! Will constitute a criminal offense, illegal, threatening, offensive, insulting and swearing, derogatory, defamatory, vulgar, pornographic, indecent, personality rights, damaging or similar nature in the nature of all kinds of financial content, legal, criminal and administrative responsibility for the content of the sender member / members are belong.
Related News