Police officers were martyred in a PKK car-bomb attack 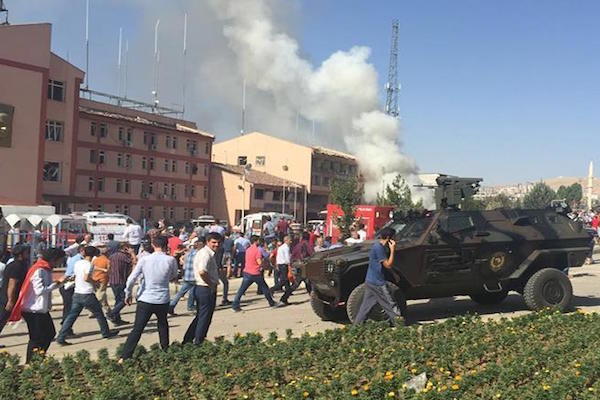 ELAZIG, Turkey-Three police officers were martyred in a PKK car-bomb attack on a police station Thursday in eastern Turkey's province of Elazig, the regional governor confirmed. Speaking to reporters regarding the attack, Elazig Governor Murat Zorluoglu said at least 146 people, including civilians, were also hurt in the attack.

According to the Health Ministry, some of the injured were in critical condition, who were being treated in local hospitals. Meanwhile, the Radio and Television Supreme Council banned all broadcasts about the deadly attack in the interest of public safety and ongoing police probe.

The blast comes hours after two other terrorist attacks hit the eastern city of Van and Hakkari, a province in southeastern Turkey. Three people, including a police officer, died in the Van attack, which also injured over 70 people.

Van Governor Ibrahim Tasyapan said PKK terrorists detonated a car bomb near a police station in the city's Ipekyolu district shortly after 11 p.m. [2000 GMT] local time, Wednesday. Tasyapan said a suspect was caught during an operation launched after the attack and confirmed that many buildings in the area had been damaged.

In Hakkari, two police officers were hurt in an attack by the PKK, a security source added. The PKK – listed as a terrorist organization by Turkey, the U.S. and the EU – resumed its 30-year armed campaign against the Turkish state in July 2015. Since then, more than 600 security personnel have been martyred and more than 7,000 PKK terrorists have been killed.