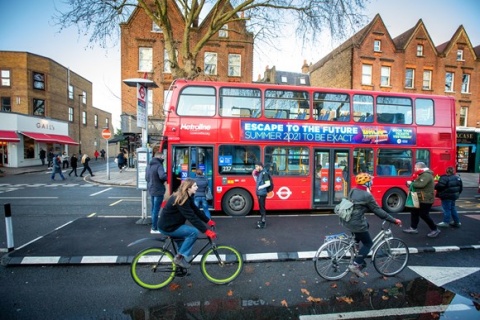 New cycle count data suggests that cycling increased in both inner and outer London last year, with the greatest increases in outer London. Despite overall journey numbers being significantly reduced due to lockdown restrictions, cycling has increased by 22 per cent in outer London compared to spring 2019, with a seven per cent rise in inner London. This follows analysis published by TfL in December that showed walking and cycling accounted for almost half of all journeys between April and June last year. Transport for London (TfL) has published new cycle count data that shows increased levels of cycling in both inner and outer London last autumn, as people across the capital continued to use active travel as a vital way of getting around during the coronavirus pandemic. Despite a huge drop in the number of journeys being made overall as more people work from home and people only travel for legally permitted reasons, Londoners have been increasingly cycling to make essential trips and for exercise.

Since 2015, TfL has carried out annual cycle counts in both inner and outer London, usually in the spring. These count the numbers of people cycling past fixed points on the capital’s cycling network over the course of a day.

Significant increases in outer London also suggest that the types of journeys may be changing, as people increasingly use bikes to get around their local area, to access their local high streets and for exercise.

TfL research shows people who walk, cycle or use public transport to visit their local high street do so more frequently, and spend up to 40 per cent more than those who travel by car. The number of people counted cycling on High Road Wembley increased by 236 per cent between spring 2019 and autumn 2020, with increases of 90 per cent on High Road Leyton and 61 per cent on Heath Road in Twickenham. TfL data has also regularly shown significant increases in cycling at weekends, with an increase of 85 per cent over the weekend of 16-17 January 2021 - the most recent weekend for which TfL has data for.

These increases further highlight how important walking and cycling have been to supporting travel around London during the coronavirus pandemic. In December, TfL published its Travel in London report, which showed that almost half of all journeys between April and June 2020 were made by walking and cycling - up from 29 per cent before the pandemic.

Keywords:
Outer LondonCyclingPandemicLondonNew Cycle
Your comment has been forwarded to the administrator for approval.×
Warning! Will constitute a criminal offense, illegal, threatening, offensive, insulting and swearing, derogatory, defamatory, vulgar, pornographic, indecent, personality rights, damaging or similar nature in the nature of all kinds of financial content, legal, criminal and administrative responsibility for the content of the sender member / members are belong.
Related News