Istanbul’s mayors and 19 foreign diplomat chiefs paid their respects to the victims of the Istanbul attack that took place Saturday. 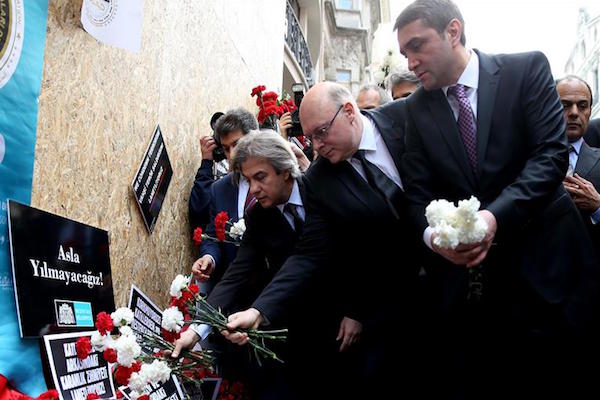 ISTANBUL (Tuncay Kayaoglu)-Istanbul’s mayors and 19 foreign diplomat chiefs paid their respects to the victims of the Istanbul attack that took place Saturday.

Mayors of Beyoglu, Fatih and Esenler districts along with several consul-generals including the U.S.’s Frederick Hunter, the U.K.’s Leigh Turner, laid carnations at the site on Istiklal Street that was rocked by a suicide bombing, which killed four people and injured 39, as the street tried to get back to its daily routine.

Belgium’s Henri Marc Jose Vantieghem, whose country’s capital was rocked by explosions that have killed at least 34 people Tuesday, called for a united fight against such terror attacks. He also expressed his thanks for the messages of solidarity that he received from Turkish people.

American diplomat Frederick Hunter stressed that every country had to act together against terrorist attacks.

After laying carnations, foreign diplomats and mayors marched to the Belgium Consulate General to express their solidarity.

A strong security presence was still visible on Istiklal Street Tuesday as it attempted to return to a sense of normalcy.

Shopkeepers close to the blast site were busy repairing shattered windows or fractured doors to erase the last remaining marks of the blast.

“Those terrorist attacks will not crack our unity,” said Aynur, a woman shopkeeper who only revealed her first name.

Another shopkeeper, whose first name is Erdem, said that although people had returned to the street, many were just wandering, implying that the attack had affected business on the normally busy street.