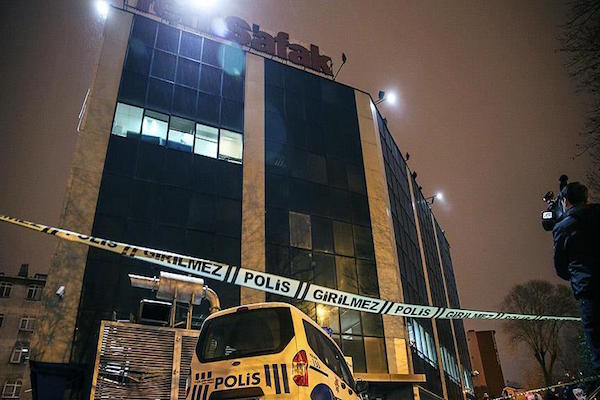 Another group attacked the Yeni Akit building with similar weapons in the city’s Kucukcekmece district. Several vehicles in the parking area were damaged by Molotov cocktails, police said.

No deaths or injuries were reported in either incident. A small-scale fire was extinguished at the Yeni Safak building.

Police sealed off the premises and have launched an investigation into both incidents.

Prime Minister Ahmet Davutoglu telephoned the owners of both dailies -- Yeni Safak’s Ahmet Albayrak and Mustafa Karahasanoglu of Yeni Akit -- to extend his sympathies over the attacks.

According to a statement from the prime minister’s office, Davutoglu said the purpose of attacks on the media would be to impede public debate at a critical time for Turkey.

Both papers are widely considered to be supportive of the ruling Justice and Development Party.

President Recep Tayyip Erdogan condemned the attacks in an address to a business confederation. “We will closely monitor the attitudes of the party members who pointed to those newspapers as a target for a terror organization when they are dissatisfied at the publications,” he said in comments seemingly aimed at the opposition Peoples’ Democratic Party.

Deputy Prime Minister Numan Kurtulmus said he “harshly condemn[ed] the dirty attacks conducted by members of the terror organization on Yeni Safak and Yeni Akit dailies" in a Twitter post.

Both Erdogan and Kurtulmus used phrases that usually refer to the PKK terror group.