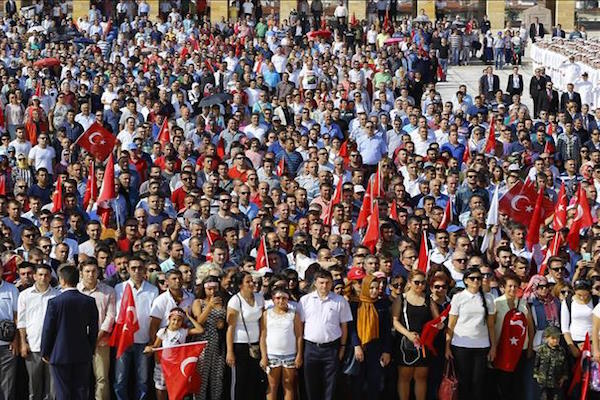 ANKARA-Relatives of those martyred during Turkey’s July 15 coup attempt have joined political, judicial and military figures in marking the 94th anniversary of a decisive victory in the country’s 1919-1923 War of Independence.

Turkish leaders on Tuesday attended the traditional wreath-laying ceremony at Anitkabir, the mausoleum of Turkey’s founder Mustafa Kemal Ataturk, in the capital Ankara.

Deputy prime ministers and prominent judicial figures were also at the Victory Day ceremony, which commemorates the victory which took place in Turkey’s Aegean region on 30 Aug. 1922.

After laying a wreath, Erdogan wrote in Anıtkabir memorial book and said: "Today we commemorate the 94th anniversary of the Victory Day with great excitement and pride.

"We are trying hard to preserve for all time the Turkish Republic with which you entrusted us despite all poverty and difficulties faced during the War of Independence."

"Our beloved people, like 94 years before, left all their differences aside and became our main source of confidence," the president added.

The anniversary which heralded the end of Turkey’s struggle for independence comes as the country takes part in Operation Euphrates Shield in northern Syria.

Photo by Murat Kaynak
Your comment has been forwarded to the administrator for approval.×
Warning! Will constitute a criminal offense, illegal, threatening, offensive, insulting and swearing, derogatory, defamatory, vulgar, pornographic, indecent, personality rights, damaging or similar nature in the nature of all kinds of financial content, legal, criminal and administrative responsibility for the content of the sender member / members are belong.
Related News