At least 36 victims and three suicide bombers were killed while scores of others were injured in a terror attack on Istanbul’s Ataturk International Airport Tuesday night, Turkey’s prime minister said Wednesday. 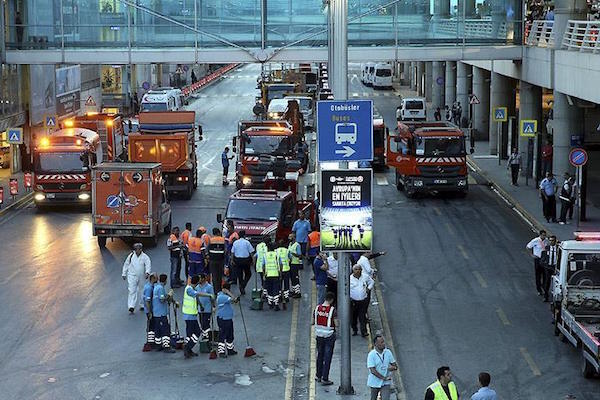 Briefing the media, Binali Yildirim condemned the attack and extended condolences to the victims’ families while he confirmed that airport operations had resumed.

Even though there are strong indications that the Daesh terrorist group is responsible for the attack in which three suicide bombers are believed to have been involved, the prime minister said police are conducting ongoing investigations.

Asked whether an attacker may have escaped authorities in the chaos of the attack, Yildirim denied the claim but stressed that security officials are considering all possibilities.

“We have injured people. Many of our wounded have been lightly injured,” he said. “Some foreign nationals were also injured,” he added.

The timing of the attack was very “meaningful”, he said, just as Turkey had begun new foreign relations approaches with Russia and Israel.

Justice Minister Bekir Bozdag said earlier that an attacker opened fire using an AK-47 assault rifle at the international terminal before detonating a suicide bomb and Gov. Vasip Sahin said law enforcement believed three terrorists had blown themselves up at the entrance to the terminal at the airport after police fired at them.

President Recep Tayyip Erdogan discussed the terror attack with Yildirim and Hulusi Akar, Chief of the General Staff of the Turkish Armed Forces, at the Presidential Palace, according to presidential sources.

Police are still at the scene hours after the attack and access to and from the airport that had been blocked has been restored.

Yildirim was briefed by Interior Minister Efkan Ala and Sahin, and has ordered the formation of a crisis desk.

Huseyin Tombul, who witnessed that attack, said the explosion occurred while he was waiting at the airport’s arrivals Gate A.

He said after the explosion they were sheltered at the garage. "A second explosion happened at the Gate B. Four of my friends lost their lives. There are lots of wounded," he added.

Seven police officers and four civilians were killed in that attack and 36 others wounded.