Hundreds of colonels were retired from the Turkish Armed Forces 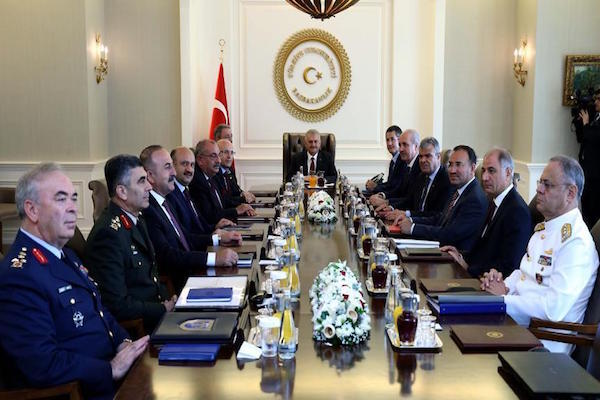 ANKARA (AVRUPA TIMES)-Hundreds of colonels were retired from the Turkish Armed Forces in a meeting of the Supreme Military Council in Ankara on Tuesday. The decision to remove 586 colonels was approved by President Recep Tayyip Erdogan. The figure includes 470 army colonels, 71 from the navy and 45 air force colonels.

The council extended the tenures of 434 colonels from across the three services by two years. The length of service for all officers was also changed to 28 years, beginning at the end of August.

The meeting was the council’s second since the July 15 defeated coup.

The meeting began under the chairmanship of Prime Minister Binali Yildirim at the Cankaya Palace in Ankara following the council members’ visit to Anitkabir, the mausoleum of Turkey’s founder Mustafa Kemal Ataturk.

Several top ministers -- deputy prime ministers as well as the foreign, justice and interior ministers -- now have seats at the council as a result of a key reform made in wake of the foiled coup.

The venue for the council’s meetings was also changed for the first time from the General Staff headquarters to the prime minister’s residence at Cankaya Palace.

Following the five-hour meeting last month, the council had opted to keep Gen. Hulusi Akar as chief of General Staff. It also decided to keep commanders of land, air and naval forces in their posts.